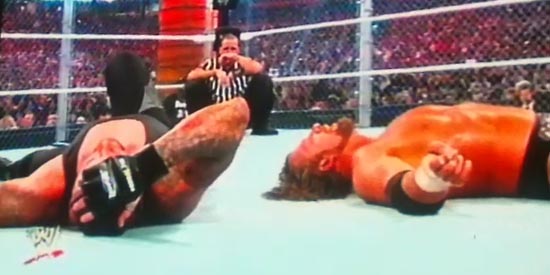 It’s the closest thing to a Manny Pacquiao-Floyd Mayweather fight.

For 30 minutes, Taker and the Game slugged it out, wrestled and bashed each other with chairs, metal ladders, and a sledgehammer.

It was an all-out, no-holds-barred slobberknocker between the two veteran pro-wrestlers inside a chain-link cell in one of WWE’s trademark matches, the “Hell In A Cell.”

Find out who won between the The Deadman and the Cerebral Assassin in Studio 23’s airing of Wrestlemania XXVIII tomorrow night, Tuesday, April 3 at 9:30 pm.

Other matches also featured in this year’s Wrestlemania are the main event, The Rock vs. John Cena in a singles match, CM Punk vs. Chris Jericho for the WWE Championship title, Kelly Kelly and Maria Menounos vs. Eve and Beth Phoenix in a Women’s Tag Team match, The Big Show vs. Cody Rhodes for the WWE Intercontinental title, Kane vs. Randy Orton, Sheamus vs. Daniel Bryan for the World Heavyweight title, and a twelve-man tag-team match between the teams of David Otunga, Mark Henry, Dolph Ziggler, Jack Swagger, The Miz, and Drew McIntyre, vs. R-Truth, Kofi Kingston, Zack Ryder, The Great Khali, and Booker T.

Wrestlemania XXVIII will also have its replay on Studio 23 on April 5, Thursday at 8:30 pm.