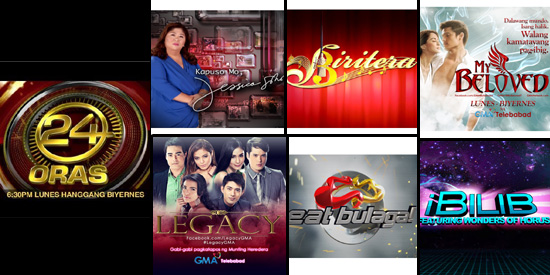 "In Mega Manila, where more than 59 percent of total urban television households in the country are found, GMA recorded a commanding total-day average of 40.1 household share points putting ABS-CBN's 26.0 points in distant second and way ahead of TV5’s 14.4 points.

"The list of top-rating shows in Mega Manila was almost an exclusive terrain of the Kapuso Network as it swept 7 out of 10 slots. The GMA programs that made the list were 24 Oras, Kapuso Mo Jessica Soho, Biritera, My Beloved, Legacy, Eat Bulaga, and iBilib.

"In Urban Luzon, which accounts for 77 percent of the total urban television households nationwide, GMA also prevailed over competition with a total-day average of 38.8 share points versus ABS-CBN’s 27.4 points and TV5’s 14.1 points.

"GMA was consistently ahead of ABS-CBN and TV5 across all dayparts in Mega Manila and Urban Luzon, most notably in the afternoon block where GMA scored ratings equivalent to more than twice that of its rival stations.’

"GMA Network subscribes to the Nielsen TV Audience Measurement along with 21 other companies including two local networks, namely, TV5 and Solar Entertainment; Faulkner Media; CBN Asia; 14 advertising agencies and three regional clients. On the other hand, ABS-CBN is the only local major TV network reportedly subscribing to Kantar Media, formerly known as TNS.