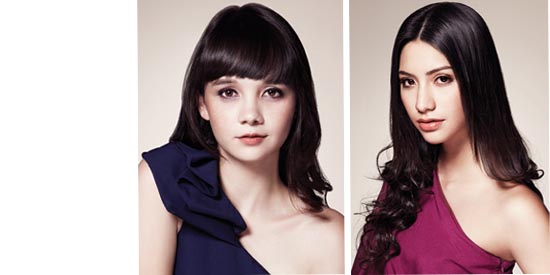 Asha Cuthbert (left) and Jacqueline M. are both half-Filipina/ half-British. The former was raised in Hong Kong, while the latter grew up in the Philippines.

The reality show aims to bring together 12 aspiring models of Asian or Pan-Asian descent, and let them face grueling tests of character, action-based challenges designed by a mixed martial arts champion, and even photo face-offs crafted by Asia's top fashion professionals.

One of the contestants vying for the title is half-Pinay/ half-Brit Asha Cuthbert, a 20-year-old model who grew up in Hongkong. (CLICK HERE to read related story)

She shares that with her experience in video editing and now modeling, she sees for herself a future where these two distinct fields can work hand in hand.

"Being in the modeling industry, you get to meet a lot of people, it's about the connections, and this will help me.... especially since I'll be studying media this September. So when I get my degree down, it will hopefully just match up."

She will be studying in Macau this coming Fall and, thankfully, she can still do modeling on the side, "because it's university, it's more free, I don't always have to go into lectures because it's about the projects so I can choose my classes and it can work out well with my modeling."

Asha also reiterates that because of supermodels like Tyra Banks, the stereotype of airhead supermodels is totally debunked.

"She's the girl who went to Harvard and studied business. She has a show, a business, a book, so basically, defying all the stereotypes associated with the word supermodel."

She underscores, "Being a supermodel in this decade means you have to be a people person, not just the looks."

Speaking of Tyra Banks, how similar or different is Supermodel Me from that successful franchise called America's Next Top Model? Do they have makeover sessions as well on Supermodel Me?

Asha's reply: "We were all expecting a makeover. But there was no makeover! It's definitely more intense. Because ANTM has done so many seasons, it kinda has become the same. I've been watching the new season and it is getting a bit too out of hand."

She continues that with Supermodel Me, "it's definitely more fresh, more Asian... the challenges have more meaning to it, the physicality, and pushing us to our limit. Definitely a fresh new look compared to ANTM."

Another thing to look forward to: the idea of having half-Asians with various backgrounds (European, Caucasian, South American) under one roof.

Says the 20-year-old model, "There is a lot of whispering behind each others' backs then suddenly it explodes. There was so much yelling and conspiracies."

She laughs as she explains, "Because we are all half-Asian. Yes, we are timid and we bottle it up but then, when it explodes, it's really intense!"

What it is like to work with the other half-Pinay/half-Brit on the show, Jacqueline M.?

Are they good friends, considering their shared heritage?

She laughs and tells us, "Ooh, ooh, she caused so much drama!

"The first few episodes I stayed clear of her, it was too much for me, even though she's 18, she caused so much drama and adds so much spice to the house!"

Asha narrates how ridiculous it was when Jacqueline snuck out of the house. And when there were less girls in the house, Asha just kept things civil between them, and how "none of us tried to be like BFF's with her because of all the drama."

So why should the Filipino audience tune in to Supermodel Me?

Asha concludes with a come-on, "There are two Filipinos on the show. I would like the Philippine audience to see that in action, and how fun it is to see how different we are," all mixed in with a group of Asian and Pan-Asian girls.

Indeed, Supermodel Me showcases the Asian concept of looking for the next supermodel, offering a boot camp like no other.

Supermodel Me airs locally via KIX Channel 63 on SkyCable Metro Manila (Tuesdays at 10:00 p.m.), Channel 82 in Cebu, and Channel 96 in Davao.