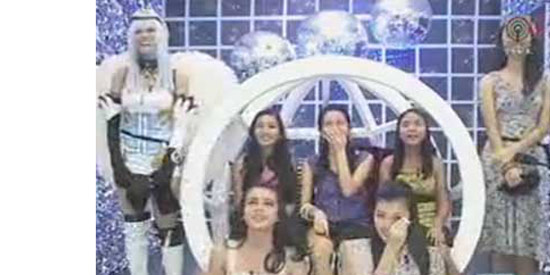 The remaining housemates for Pinoy Big Brother Teen Edition 4 were introduced this afternoon, April 9, in the reality show's Uber program.


(CLICK HERE to read about the 9 teen housemates introduced earlier)

Hosting the show's Uber program were Bianca Gonzales, Robi Domingo, and John Prats. Once again, the '70s era was in groove, to honor Big Brother or Kuya's favorite decade.

First introduced was popular cosplay artist Myrtle. This 17-year-old Cosplay Cutie ng Iloilo is already popular in anime and otaku circles, so it is not a surprise that she was introduced wearing a cool outfit. Aside from loving cosplay, she is also a president of the Sangguniang Kabataan in her area.

Next up was the Inday Husay ng Cebu, Mariz, who works as a maid to support her family. Mariz works as a kasambahay in the day, and pursues her studies at night. When asked what she can contribute to the house, Mariz said she can cook for the housemates.

Nika, the Ala Angel ng Batangas, loves joining beauty pageants and knows how to dance. She had learned responsibility at an early age when her parents separated. But now that her OFW mother and faith healer father have patched up their differences, she hopes to help them have the happy family she had always dreamt of.

Clodet is the Prankang Chikateen ng Davao. She may look shy, but she's a veteran of oration and declamation contests in her school. She also serves in this school's student government. She dreams of giving her parents their own house and business. She also wishes to be a beauty queen someday.

Karen is the Hagikhik Chick ng Mindoro, because she can always be seen with a smile. But behind her happy face is a tragic memory of her father dying due to a traffic accident. She became emotional when she she was interviewed by the PBB hosts regarding her late father.

Lastly, Filipino-French Claire is the Cinderebel ng Makati. Due to an absentee dad and a mother wracked by a mental disability, she became a rebel at an early age. But she says she is now a changed woman because she became a Christian. She hopes to prove that she can stand on her own feet even without her parents' help.