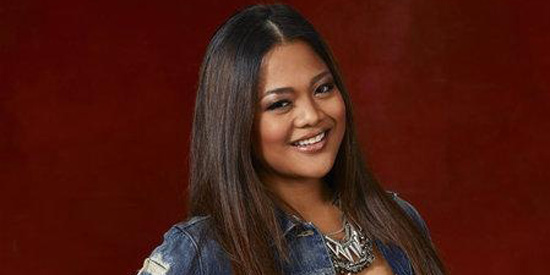 Cheesa Laureta, whose parents are Filipino immigrants from Manila and Cebu, was born and raised in Hawaii.

Full-blooded Pinay Cheesa Laureta is making waves in The Voice Season 2 as she makes it to the top 24 finalists under the mentorship of rapper Cee Lo Green. The 21-year old singer is a full-blooded Filipino born and raised in Hawaii.


Watch her pursue her dream of becoming the next Filipino international singing sensation every Saturday, 5:30 PM, on Studio 23 with a replay every Monday at 7 PM.

Cheesa, who was born and raised in Hawaii, is set to compete with finalists coming from the teams of other celebrity musician coaches namely Christina Aguilera, Adam Levine, and Blake Shalton. Carson Daly hosts this worldwide phenomenal hit show with Christiana Milian as the new social media correspondent.

The Voice is a unique singing competition where auditions are based solely on vocal ability. In the first stage called the "blind auditions," all four coaches must listen to the artist without facing him or her and must press their respective buttons if they want the artist to be part of the team they will mentor. Hitting the button will also trigger the coach’s chairs to swivel so that the coach can finally see the face behind the voice.

This season, the coaches get to choose 12 contestants each to form their respective teams. They will then dedicate themselves to develop their singers via mentoring and will pit two of their own team members in the second round called the "battle phase."

After the vocal face-off, the coach must then choose who among the two singers will advance. Those who will survive in the battle rounds will proceed to the third stage— the live performance shows— wherein viewers can save them from elimination by voting.

In the end, each coach will have one star artist left to compete against the other team’s finalists and the last one standing will be named “The Voice." The winner will receive a recording contract as a grand prize.

Aside from airing this singing competition from the US, Studio 23 has also started airing the eighth and final season of the hit TV drama series Desperate Housewives and eighth season of Grey’s Anatomy.

Watch the intense happenings in the lives of the housewives of Wysteria Lane. What will happen after Carlos murdered Gaby’s evil stepfather? How will Susan, Gaby, Bree, and Lynette’s cover up take its toll on them?

If Desperate Housewives will finally bid goodbye, the rumored to be final season of Grey's Anatomy may have hopes of being extended after producer Shonda Rhimes said she plans to continue the show regardless of whether original cast members will return. Speculations on the show’s demise were roused due to the unclear contract renewals of its lead stars Ellen Pompeo, Patrick Dempsey, Justin Chambers, Sandra Oh and Chandra Wilson.

The Voice Season 2 airs every Saturday, 5:30 PM with a replay on Mondays at 7 PM. Watch Grey’s Anatomy every Thursday at 7 PM, back-to-back with Desperate Housewives at 8 PM on Studio 23.