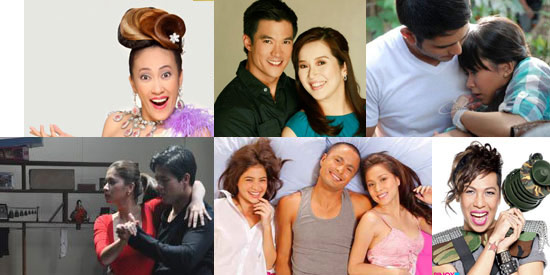 Star Cinema movies that have reportedly grossed over P100 million include (top frame, L-R) Ang Tanging Ina Mo (Last Na 'To), Dalaw, Catch Me I’m in Love as well as (bottom frame, L-R) In The Name of Love, No Other Woman and Praybeyt Benjamin.

"Consumer sales for 2011 amounted to P10.6 billion, posting a 1% increase from a year ago. Sky Cable continues to contribute positively with revenues increasing by 10% to P4.3 billion. This is mostly driven by the increased take up of its broadband service subscriptions which increased by 18% year-on-year. However, ABS-CBN Global revenues declined by 8% year on year in peso terms due to the decline in subscribers and the appreciation of the Philippine peso against the US dollar. ABS-CBN Global’s overall viewer count was almost flat compared to the previous year. There was subscriber growth inCanada, Asia-Pacific andAustralia, while there were declines in the Middle East, Europe, North America andJapan.

"Total operating and other expenses dropped by P1.1 billion or 5% year-on-year to P22.3 billion. This was partly a result of lower cost of sales and services and general and administrative expenses (GAEX) as the company continued its effort to manage and control expenses. The decline in both expense accounts partly offset the increase in total production costs due to the Company’s drive to produce quality and innovative programs.

"Capital expenditure and film and program rights acquisition for the year amounted to P4.2 billion, 14% higher than the level of spending from the previous year. Additional equipment was purchased to increase the company’s capacity to produce additional new programs.

"ABS-CBN maintained its national audience share and ratings leadership with prime-time audience share averaging 43%, with a 13 percentage point lead over GMA-7’s, based on the Kantar National TV Ratings figure.