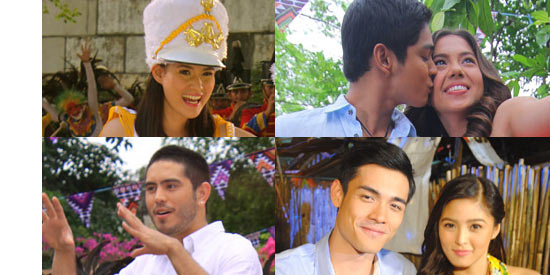 The 2012 edition of ABS-CBN’s summer station ID (SID) titled “Pinoy Summer Da Best Forever” is a colorful look into the Filipino way of celebrating the hottest season of the year.

It opens with Angelica Panganiban sitting by the roadside, sweltering under the heat of the sun while waiting for assistance since their car broke down. She and her Banana Split co-stars are then welcomed onboard a truck filled with Ati-atihan performers.

Some Kapamilya stars were given the chance to show different facets of themselves such as when Bea Alonzo dressed up as a majorette while KC Concepcion showed off her fire spinning skills.

Still, the SID offers a lot of predictable ingredients. Even before you see the music video, you’ll know that there will be beach scenes, street dancing, fruits, halo-halo, native games and of course, lots of Kapamilya stars delivering their very best 3-seconder smiles. Even the theme of being “da best” is a repeat, or probably just a resumption of their ‘Bida Best’ campaign from the past year.

Although many, if not most of the elements remain the same every year, the challenge is to bring new flavors in every edition. This 2012, the Kapamilya creative team tries to highlight the colors of summer, trying to snag from its competitor the association of “makulay,” which GMA-7 has been using for quite a while now to describe the Filipinos’ “buhay.”

To differentiate it from past summer station IDs, the creative team decided to capitalize on happiness-inducing summer colors that appear in the form of body paint, street graphics, jeepney designs and house decors. Even the splash of water (especially the one generated by a topless Piolo Pascual as he went cliff diving) becomes stylized as computer generated imagery add color to the crystal clear water. It’s effective and it gives that desired effect of having viewers feel their hot summer day becoming more fun and alive. It’s very refreshing to the eyes and it wakes up the senses, especially because it fuses very well with the music.

Speaking of music, we have always liked how ABS-CBN adds a contemporary flavor to its choice of music in its station IDs. The tandem of Amber and Marcus Davis Jr. have perfected the craft of blending contemporary beats with traditional sounds, like in this case, fiesta drums and whistles.

Hearing Sarah Geronimo perform “Pinoy Summer Da Best Forever” makes you want to wish that the Popstar Princess performs more upbeat songs like this. Seeing and hearing Gerald Anderson rap some of the lines of the song was a pleasant surprise.

It is also admirable that they chose to highlight Philippine summer festivals and how they recreated these is quite impressive. Filipinos are known for our colorful festivals, which is why celebrations such as the Panagbenga and Ati-Atihan are given prominence in the SID.

The celebrities, after all those years of doing these music videos, have also learned to look natural, not the usual hyper fun acting, jumping and dancing all over with both eyes and mouths wide open.

Despite the predictability of outdoor scenes, it is evident that the team behind this SID tried to depict Pinoy summer as fun as possible. This is what the SID is really trying to convey in the first place: the Pinoys’ kind of summer is the best, whether it is celebrated in Manila or in Hawaii.

The variety of locations is outstanding: there are white beaches, rock formations that are perfect for cliff diving, and ancestral houses decorated with kiping (leaf-shaped wafers made of rice).

Even the extras are mixed in with the stars seamlessly, eliminating the usual awkwardness.

But the real strength of ABS-CBN’s 2012 summer station ID lies in the fact that everything and everyone look strikingly beautiful—the stars appear radiant, the colors are vibrant, plus the catchy tune makes you want to stomp your feet and dance to the beat.

All these elements make watching it over and over again, a visual feast.

(To view behind the scenes photos of ABS-CBN's summer station ID, visit PART 1 and PART 2)