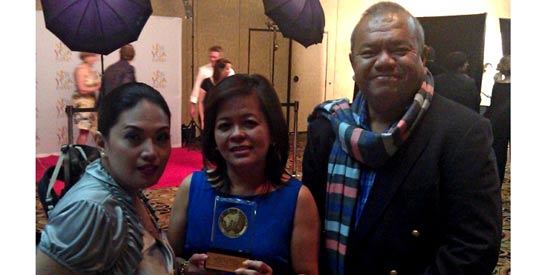 ABS-CBN continues its winning streak at the New York Festivals (NYF) International TV and Film Awards 2012 after its News and Current Affairs programs bagged awards at the prestigious competition.

Krusada bagged a Bronze World Medal in the Social Issues/Current Events category for its report on the condition of elderly and ailing inmates who were expected to be released from prison but were denied parole.

Abner Mercado, who anchored the documentary titled “Laya” aired in June last year, said it is an honor as a journalist and a documentarist to be recognized by a respected award-giving body.

“This award is the result of the ‘Krusada’ team’s collective team effort. This inspires us to present more stories that are greatly relevant to Filipinos,” he said.

For years, Abner has tracked stories concerning elders who are sick and dying in jail who wished to be granted executive clemency so they can spend the end of their days with their families.

Krusada, which airs on ABS-CBN and DZMM TeleRadyo every Thursday, is a News and Current Affairs Program which gives ABS-CBN’s top and veteran news anchors a venue for their journalistic crusades.

Ging Reyes, head of ABS-CBN News and Current Affairs Division, also stressed that Abner’s winning documentary reaffirms what Krusada is all about.


“Krusada does not just feature stories about people’s lives. The journalists of ‘Krusada,’ stand up for those who don’t have a voice, for those who suffer, and to provoke powerful and influential people to do something for the benefit of the majority,” said Ging on abs-cbnNEWS.com.

The NYF also awarded TV Patrol, the country’s longest and highest-rating primetime newscast, its second finalist certificate for its coverage of Typhoon Juaning in the Best newscast category. TV Patrol was also named a finalist in the same category for its reportage of the Manila bus siege titled “Bloodbath in Manila” at the 2011 NYF.

Three programs from ABS-CBN also made it as finalists, namely Korina Sanchez’ magazine program Rated K for the Magazine Format Category, EDSA 25: Sulyap sa Kasaysayan, the Kapamilya network’s special documentary on the 25th anniversary of the 1986 People Power Revolution for the History and Society category, and the documentary program Storyline for the Biography/Profiles category. Last year, Storyline earned three recognitions from the NYF last year, namely Silver World Medal in the Biography/Profiles category, Bronze World Medal in the Community Portraits category, and a finalist certificate in the Social Issues/Current Events category.


The New York Festivals® World's Best Television & Films™ recognize the "World's Best Work™" in news, sports, documentary, information and entertainment program as well as in music videos, infomercials, promotion spots, openings and ID's. Now entering its 54th year, the total number of entries continues to grow, now representing over 35 different countries, making the NYF™ Television & Film Awards one of the most well-known and widely respected competitions on the globe.