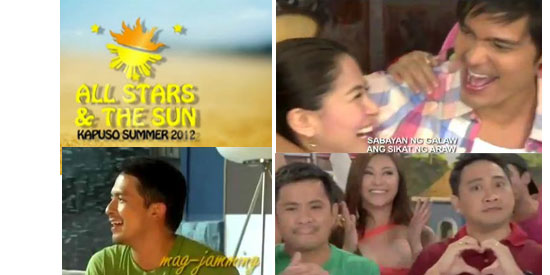 Nowadays, a station ID (or SID) represents a grand production – a gathering of the network’s stable of stars in a music video-style presentation.

More than just a compliance to broadcast regulatory bodies, SIDs have now become a 2-minute (or more) representation of what a station stands for. More importantly, they instill a sense of pride in the network stars, employees and the network fans who are associated with their channel of choice.

That is why we wish GMA Network invest more time and effort when producing their annual station IDs. For this summer, the GMA summer station ID (SID) dubbed “All Stars and The Sun” fell quite short of expectations.

GMA-7’s 2012 SID is a collection of videos featuring Kapuso stars grouped according to the programs they belong to. These stars show the different fun things people can do during the summer season like, what the superimposed texts say, “maglambingan, mag-kodakan, mag jamming, etc.”


In this way, the Kapuso Network’s station ID directed by Mark Reyes mirrors reality. It veers away from grandness and simply depicts how ordinary Pinoys celebrate the hottest season of the year.

Given the simplicity of the concept, the way they presented these activities could have been showcased more creatively.


It feels like they made this list based on what’s available on set when the SID production team dropped by their respective studios or locations. Simply put, some things looked unplanned and rushed, like the scenes of the group of boys playing basketball wearing jeans and the beach scenes that almost have a grainy and raw quality of a mobile phone camera footage (or maybe that was intentional?).


Some shows chose to contribute to the SID by presenting videos of them goofing around in their respective sets and studios, which is odd because they (like Eat Bulaga hosts) did exactly the same thing for their Christmas 2011 SID.

The cuts and transitions between artistas are also too fast, probably to fit all their celebs in one video, but it results to many stars not having enough exposure and being overlooked. Even GMA-7’s prized stars, Marian Rivera and Dingdong Dantes, were not given the prominence they deserve, given their stature.

The concept “All Stars and the Sun” could have been very good, being a clever play on “3 Stars and the Sun,” a nationalistic phrase that’s now associated with rapper Francis Magalona whose son Elmo did the rap parts of the song. Aside from Elmo, other Party Pilipinas artists like Janno Gibbs and Jaya also contributed greatly to this song.


The song itself is excellent, having a summer-y feel without being bound by the typical and predictable sounds associated with the beach and fiesta season. Above all, there is a possibility that viewers might develop LSS (last song syndrome). In fact, after I showed the station ID to my colleagues, they kept on repeating the phrase “There’s only one hot party” over and over again for several minutes.

The problem is that it’s hard to see the “one hot party” in the SID, since the lyrics do not quite match the visuals used. Netizens observed the mismatch especially during the final scene wherein the Kapuso stars pointed at the night sky when they sang “sun.” Talk about sending mixed signals. For the final one hot party with GMA-7 stars and the sun, there sure is a notable absence of the sun.


Which brings us to what could also be the pitfall of this GMA summer station ID: there is a lack of focus and no central theme. It talks about one hot party, but there’s also GMA-7 being the home of all-stars and the sun, and there’s the list of things you can do during summertime as demonstrated by the Kapuso celebrities.

GMA-7 has produced a lot of outstanding videos in the past—just look at the teasers for upcoming GMA Telebabad shows, both versions of the Kapuso Anumang Kulay ng Buhay station IDs and the unforgettable Lupang Hinirang production. Maybe next time, when GMA does its station ID without intending to make it a grand production, they should go for a different route, concept and strategy.


The GMA summer station ID need not be grand but it should have a solid concept that is translated onscreen with excellent technical quality.