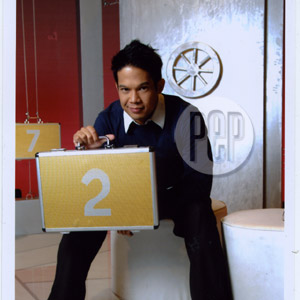 DJ Mo Twister hosts Kabarkada: Break the Bank, wherein viewers can choose from the 14 briefcases that may contain cash prizes ranging from P1 to P100,000. This game show airs on Studio 23 every weeknight from 7:30 to 8:30 pm.

By using a cellphone and a TV set, viewers can take part in the newest game show to be launched by Studio 23 tonight, August 27. DJ Mo Twister introduces Kabarkada: Break the Bank, which allows viewers to win up to P100,000 from Monday-Friday.

Studio 23 managing director Leo Katigbak announced that the Philippines is the second country to acquire the franchise of the show from Endemol International, the company behind Big Brother, Deal or No Deal and other shows.

"The prizes of Break the Bank are more suited for the audiences of Studio 23. It's more relevant to the lifestyle of our target audience, those who are 16 - 34 years old," explains director Katigbak. Aside from the Philippines, Break the Bank is being shown in Greece.

To demonstrate how Kabarkada: Break the Bank will be played, a simulation of the game was presented to the press last Wednesday, August 22, at the 13th floor of the ELJ Center. DJ Mo Twister emphasized that those who want to join the game show did not have to fall in line or visit the studio.

By registering once, the viewers will have the chance to be called by DJ Mo and take part in the game show to aired every weeknight on Studio 23 from 7:30 to 8:30 pm.

The TV host will call lucky home viewers with his questions. Viewers can choose from the 14 briefcases that may contain cash prizes ranging from P1 to P100,000. Before opening the chosen briefcase, Mo will offer viewers "Kabarkada Prize Packages" that may include holiday trips, gadgets, or even a brand new car.

There are also surprise segments such as the Star Value, wherein a chosen celebrity will offer items that have sentimental value to the star who donated the prizes. During the simulation game, Sharon Cuneta offered a DVD player that she is endorsing.

Kabarkada: Break the Bank is the participatory version of the hit show Kapamilya: Deal or No Deal. There will be no studio contestants, only home viewers playing the game in the comfort of their homes.

Viewers can join and play the interactive TV game anytime and anywhere, after a one-time free text registration, by answering simple yet entertaining word games. "You need your cellphone, a TV set, and a little bit of common sense," explains Mo. "We have a banker who will be raising the stakes a bit higher."

Since the format of the show is quite similar to Deal or No Deal, is there a possibility that Break the Bank will compete with the game show hosted by Kris Aquino on ABS-CBN?

"I don't think so. Iba naman ang market ng Studio 23 and ang kasabay nito ay ang mga teleseryes. It's a totally different group being served by ABS-CBN," managing director Katigbak points out. "If you want to win P1 million or P2 million, I think you will want join Deal or No Deal, but if you just want to have fun and win a trip or cash, then you will want to join Break the Bank."

Why did they choose Mo Twister to host this new game show? "It was a very short list but Mo was on the top of our list. I've seen him grow as a host and this show is more challenging. We were thinking of someone smart, articulate, can think of his feet, and charismatic—and Mo fit the bill," Leo explained.

With this new game show, DJ Mo Twister will now be seen on TV for seven days a week—Monday to Friday on Kabarkada: Break the Bank, Y Speak on Saturdays, and Showbiz Central of Sundays.