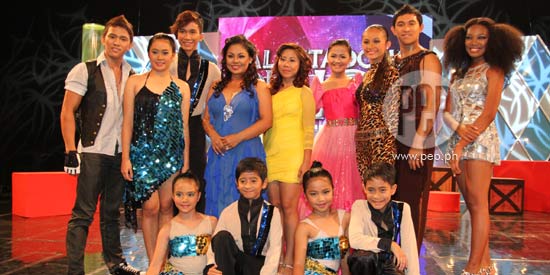 The Hall of Famers of Talentadong Pinoy Season 3 are (standing, from left) Johnny Vilanueva as Sustantivo, members of the group Dancing is Fun, Ayegee or Ivy Grace Paredes, Monica Regal

The 3rd Talentadong Pinoy Battle of the Champions will be held live on May 5 and May 6 at the Quezon Memorial Circle. Ryan Agoncillo hosts this talent search currently airing on TV5.


The eight Hall of Famers competing for the title of Ultimate Talentado are Craig & Samantha, Monica, Ayegee, Melbelline, Dancing is Fun, Astroboy, Sustantino, and Rhyzza.

New Kapatid talent Sharon Cuneta will also grace the stage for a special performance on May 6.

This will be the third time that Talentadong Pinoy will showcase a showdown of their Hall of Famers. In 2010, the Yoyo Trickster Joshua Davis became the champion while last year’s Ultimate Talentado was Joseph the Artist, who created incredible works of art using sand.

Meet the eight Hall of Famers who are vying for the grand prize package of P1 million cash, a brand new car, and a chance to compete and represent the country in the World Championship of the Performing Arts (WCOPA) to be held in Hollywood, California.

The ballroom dancing siblings, Craig and Samantha Abaya-Campos, hail from New Jersey, USA. Craig is now 16 years old while Samantha is 14 years old. They started dancing when they were seven.

Craig & Samantha have several achievements as partners in dancing. They won the Junior Champions in America’s Dancing with the Stars in 2008. They also appeared as guests in a show of Tyra Banks.

What can they say about their performance in the finals? “It’s been challenging... I think our performance is gonna be explosive in a sense where you won’t be take your eyes off, every single second of the dance,” Craig explained.

The first Filipina sand and light artist, Monica Regalario, is a student of Joseph the Artist, the Ultimate Talentado of 2011. Monica and Joseph worked in the same museum and when Joseph left, Monica was the one who took charge of the work. At first Monica was afraid of joining Talentadong Pinoy because of the comparisons to her mentor, Joseph the Artist. But when Typhoon Pedring hit their house, Monica decided to join to give her family a better life.

Ayegee, whose real name is Ivy Grace Paredes, is a powerful belter who is passionate about singing. Ayegee is a 29-year-old Nursing student who joins singing contests in small fiestas as well as nationwide competitions. She previously joined Sing Galing and Philippine Idol. She currently works as a performer in a comedy bar.

15-year-old singer Melbelline Caluag is a high school student from Bulacan. Melbelline loves to sing kundiman songs rather than pop songs. In fact, she is being compared to the “Queen of Kundiman” Sylvia La Torre who was popular during the 1960s. Even though she had no formal voice lessons, Melbelline is eager to win this competition because she wants to help her family improve their house.

Dancing is Fun is the name of a ballroom dancing group from Catarman, Northern Leyte. The group almost did not make it to the Talentadong Pinoy Hall of Famers since they lost to Melbelline. But the group strived to do better routines and much improved their dancing. They joined Talentadong Pinoy again and their hardships paid off as they were inducted in the Hall of Fame.

Known for dancing with hula hoops on fire, Daniel Darwin or Astroboy, is a 23-year-old theater actor. Astroboy worked inNew York but he decided to go back to thePhilippines to teach different kinds of hula hoop dancing to the new generation.

The flexible and daring pole dancer, Johnny Vilanueva also known as Sustantivo, performs death-defying stunts. He is a former dance instructor who wants to win so he can use the prize money to build his family’s dream house.

Rhyzza Nicol Kafilas is a dancer and singer fromSan Mateo, Rizal. Her father was an African-American. Because of her curly hair and dark complexion, Rhyzza was always teased because of her looks.

How do you deal with people who judge you based on your appearance? “Nung bata pa ako iniiyak ko po yun pero ngayon parang ok lang sige as long as may talent naman ako saka may mga nagsasabi naman na hayaan mo lang sila,” she admitted.

Rhyzza proved herself as she won in the Wildcard episode and made it as one of the Hall of Famers.

Witness the Battleof the Champions of the eight Hall of Famers of Talentadong Pinoy as they compete for the title of Ultimate Talentado 2012. The performance night will take place on May 5 while the announcement of winners will happen on May 6 live at the Quezon Memorial Circle.