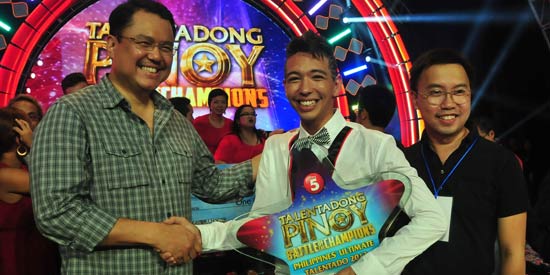 It was de ja vu all over again. Similar to its past two seasons, Talentadong Pinoy’s third Battle of the Champions held last Saturday (May 5) at the Quezon Memorial Circle reigned supreme over its competition.


Based on data from Nielsen Media Research, Talentadong Pinoy’s Battle of the Champion 3-hour special topped its 7:30-10:30pm timeslot in Mega Manila with 10.4% AMR (31.6% audience share)—beating rival programs on ABS-CBN and GMA-7. The much anticipated performance night of the eight finalists also put TV5 within the top ranking shows nationwide with 9.2% AMR (28.5% audience share).

For its Sunday episode, Talentadong Pinoy also received high ratings for the results night and the celebrity edition of the show with a 8.8% AMR (28.6% audience share) in Mega Manila and 7.9% AMR (26.5% audience share) nationwide.

Daniel Darwin, the hoola hoop and fire dancing master more popularly known as Astroboy, bested seven other Hall of Famers and was declared the “Ultimate Talentado.” He now joins the ranks of former Battle Champion winners Yo-yo Tricker Joshua Davis and Joseph the Sand Artist. Like the two before him, Astroboy will represent the Philippines to the prestigious World Championships of Performing Arts (WCOPA) in Hollywood, California. He also took home one million pesos and a brand new Chevrolet Cruze.

For the celebrity edition, Arnel Ignacio wowed the audience and the Talent Scouts with his piano skills and his heartfelt composition, earning him the title of Celebrity Talentado. The versatile host and comedian also won 100,000 pesos to be shared with Leah Patricio, a former Talentadong Pinoy Hall of Famer who sung and accompanied him during his performance.

For its performance night, more than 11,000 people flocked the open grounds of Quezon Memorial Circle to watch the Hall of Famers battle it out one last time. On Sunday, a crowd of almost 14,000 came to the same venue to witness the momentous results of this year’s Battle of the Champions.