LA Lopez narrates his journey to becoming a Christian pastor 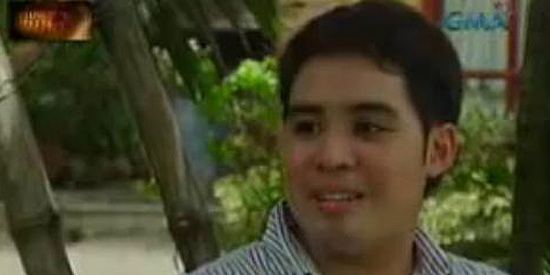 “You no longer see LA Lopez here today because it is no longer LA who lives in me but it’s Christ who lives in me,” declared the former child star during one of their services. LA, who is now called Pastor Lyle, heads the Abundant Harvest Fellowship Philippines in Quezon City.

Last May 18, LA’s interview with Rhea Santos, host of GMA-7’s Tunay na Buhay, was aired wherein he talked about his journey of becoming a Christian pastor. He admits no one could have imagined him becoming a pastor, probably not even himself.

LA recalls that as a kid he already knew that what he wanted was to sing and have his own album. He was 3 years old when he saw the album of his mother released by Vicor Records.

His mom Idonnah Villarico recalls that it wasn't easy for them since the young boy had to contend with hand-me-downs from his aunt's family.

When he was 5 years old, he first appeared on Eat Bulaga's “That's My Boy” contest where he showed off his gregarious spirit and bubbly personality. This officially started his showbiz career, as he appeared on movies and television programs, the most famous of which was the kiddie show Eh Kasi Bata.

He left showbiz the first time at 10 years old when his father died. In 2001, at 16 years old, he made a successful comeback. But this season was also marked by one of his most challenging times as he was hounded by intrigues: enduring ridicule from a comedian who called him retarded, being tagged as weird and different, and even being branded as a homosexual. During this time, showbiz still gave him something good as he was able to turn to friend Jessa Zaragoza for help and support. She became a big sister to the young boy. Sadly, it got to the point that it was just too much for the teen LA so he left for the United States where he stayed for 8 years.

Looking back, LA says that it was his being so hyper that gave him an edge back then, helping make him a child icon of the ‘90s. "Until now hyper pa rin, pero in a different way," he admitted. But now, he has learned to channel this energy into his passion for serving God and the church.

On Tunay na Buhay, he looked back on the painful events of the past that hurt him so much and how he feels about them now.

"It was on a game show, that was one of the stinging parts. There was a court problem, I charged them with this," he recalls of being called retarded. "During that time, it was really painful, kasi darating ako sa school at sasabihin ako, 'LA retarded ka pala eh!' To which he would just say that ‘retarded is not a derogatory term, it's a medical condition of someone who just lacks understanding. On rumors ‘na bakla siya,’ he says, "I really knew who I am, but it hurt to a point because when you're called something that you're not..."

Did he get depressed?

He admitted: “There was a depression that led me to me leaving showbiz.”


At that time, he got into the Florida School of the Arts and even garnered a George W. Bush scholarship, the only Asian to receive such distinction from thousands of applicants. So despite the negative events in the Philippines, showbiz expert Rey Pumaloy says that this was the best time for LA to have left showbiz because he did so when he was at the height of his “kasikatan.”

Unfortunately, LA reveals that detractors continued to hound him through hate messages online, which caused him even more pain and depression. He recalls that he received threats "like someone wants to kill me, smash my face into a wall and this was 2009, and I wasn't even in showbiz! I don't remember hurting anyone and I wish that if they were really angry with me, they would tell me straight," he recalls.

During this painful time, LA found his true purpose in life: becoming a pastor. He left behind his scholarship at the Florida School of the Arts to enter the Abundant Harvest Fellowship Florida, USA.

"If I could use part of what God gave me, the talent that I have, to share the Gospel, tell more people about the goodness of God," said the former child star who is now called Pastor Lyle. "This is something I would leave showbiz for." In 2010, he went back to the Philippines to start anew.

Is he still angry? "Now I praise and thank God, wala na. There are times, you do remember, yun mag flash sa ‘yo ang nangyari," Pastor Lyle admits. But he says, "greater is He who lives in me than he who is in the world."

At his church, he is able to channel his leadership and influence in bringing wayward teens back to God through seminars and retreats. As a pastor, he helps shepherd the growing members of all ages and backgrounds in their faith and relationship with God.

It's a family that worships together now as their home has become the venue of the church gathering. Members of Abundant Harvest Fellowship Philippines interviewed on Tunay na Buhay share how LA has helped them rebuild lives, homes, families, and encouraged them in their faith in God.

Pastor Lyle keeps his musical roots close to him as part of their home has been converted into a home recording studio with high-tech recording equipment. He says that it is here that they make the music for their ministry album. His mom serves as musical director, his stepfather as composer, younger brother on drums and Pastor Lyle doing vocals.