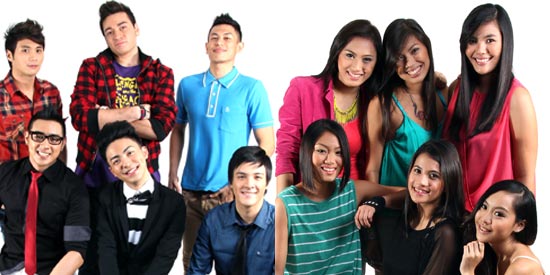 Hundreds of hopefuls flocked to the audition venues to show their hosting prowess to the screening committee of MYX. Clad in their best garb and equipped with their determination to be the next main guy/girl of MYX, aspirers raided the audition dates last April 21, 28, May 5 and 12, 2012 (1 – 6 p.m.) at the ABS-CBN Studio 12.

There may be hundreds of aspiring MYX VJ’s but only 12 will complete the roster of MYX VJ Search 2012 finalists. Among the female contenders are teacher/host/make-up artist/vocalist K.A, bright and bubbly Karen, Singaporean but Filipino-by-heart Michelle, witty Sotto-clan member Paulina, band manager/Yuzon-sister Ysab, and Ericka, one of the voices behind the hit-song “12:51.”

On the other hand, the boys who aspire to be the next male spotlight-stealer are sassy and unique Kevii, sports commentator-wannabe Mike, music producer/UP student Mica, charming Cebuano Marcky, lucky third-time auditionee Hadi, and singing cutie Anjo.

For the past searches, some of the MYX VJ hopefuls won by the massive text votes coming from their fans but in this latest installment, the winners will solely be decided by MYX. But fans are still definitely involved. MYX will take into consideration how the finalists interact with the public and their fans. So, fan-finalist connection remains important.

The finalists of the search will undergo a training experience process and different fun tasks and challenges led by the main MYX VJs (Nikki Gil, Luis Manzano, Iya Villania, Chino Lui-Pio, Bianca Roque and Joyce Pring) lasting for a month and a half.