Walang Hanggan propels ABS-CBN to lead in primetime, based on Kantar Media data 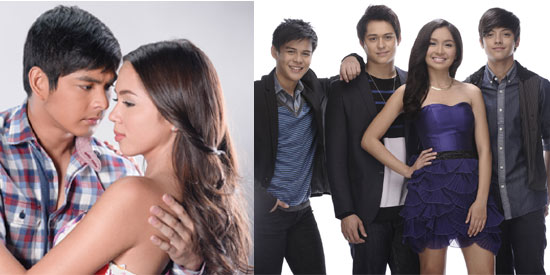 "ABS-CBN Corporation continued its nationwide leadership by having the most number of Philippine TV households watching its shows on primetime (6PM to 12 MN) last May with an average audience share of 42% versus GMA-7’s 29%, based on data from the global industry-trusted audience research group Kantar Media.

"Kantar Media, which has national panel size of 1,370 homes and 7,535 individuals that are statistically representative of total Philippine TV population, reported that ABS-CBN slightly increased its lead in Metro Manila to 36% last month from 35% in April, while GMA-7 maintained its share at 32% during primetime when most Filipinos spend time watching TV and advertisers put their investments to reach more consumers efficiently.

"ABS-CBN ruled primetime in other key territories like Balance Luzon (areas in Luzon outside Mega Manila) with 46% audience share vs GMA’s 30%; in the Visayas where it registered a two-point increase to 58% or a 40-point lead over GMA’s 18%; and in Mindanao with 59% or almost four times bigger than GMA’s 15% share.

"This primetime dominance is mainly driven by ABS-CBN’s drama series with Walang Hanggan at No. 1 with an average national TV rating of 36.5%. It was also the most-viewed program in Mega Manila with 30% vs Legacy with 20.8% and in Metro Manila with 31.8% vs 19.9%.

"Royal teleserye especially shot in Bhutan, Princess and I, was the second most-viewed program nationwide with a national TV rating of 31.7%. The Kathryn Bernardo-starrer also outperformed its rival in Metro Manila with 26.2% vs. GMA-7's new series Luna Blanca with 21.4%.

"The country's longest running primetime newscast, TV Patrol, remains to be the number one newscast in the country with an average national TV rating of 26% vs 24 Oras with 18.8%.

"Based on Kantar Media's data, ABS-CBN garnered an average audience share of 34.1% in total day with rival GMA Network placing second with 33.6% share.