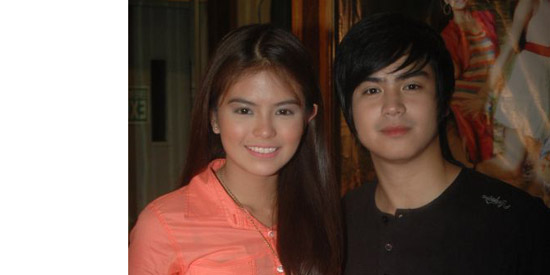 Bea Binene and Jake Vargas are some of the young stars who will bid farewell during the finale of Tween Hearts this Sunday, June 10.

After a total of 86 successful episodes aired during its run on GMA-7 every Sunday afternoon, Reel Love presents Tween Hearts bids farewell to its loyal fans and viewers with an emotional but heartwarming finale episode on June 10.

Originally slated to air for just 8 episodes, the program, which launched the careers of the network's Tween stars, was awarded several extensions after its successive victory on the ratings game.

At present, the program continues to claim leadership in its timeslot according to data from the more widely recognized industry ratings supplier Nielsen TV Audience Measurement. Based on average households data in Urban Luzon covering the period February 19 to May 27, 2012 (based on overnight data), Tween Hearts registered 31.3 share points versus ABS-CBN's Luv U's 27.3 share points. The program continued its winning streak in Mega Manila, which now comprises 59 percent of total television households nationwide, after it garnered 31.7 share points against the 24.7 points of the Kapamilya program Luv U.

Through the program's episodes and storytelling, the tweens impated lessons such as the importance of education and family ties as well as life's priceless values like respect, honesty and love.

From first loves to first heartbreaks, from "fitting in" to peer pressure, from bullying to how broken marriage affects the teens, Tween Hearts' universal theme for all ages transcended into tackling more complicated issues, complex character dynamics and exciting tandems during its two-year run on the air.

In the last two episodes, the lives of Josh (Joshua) and Bambi (Barbie) will be put in jeopardy. Will they survive this unfortunate accident? Meanwhile, Bel (Bea) and Rick (Derek) will have a confrontation on the kiss that happened between them. Jacob will put an end to his friendship with Rick because of this incident. Will Aya (Joyce) and Kris (Kristoffer) find a way to patch up things between Jacob and Rick?

Viewers must also await whether or not Josh will finally leave Bambi and put their friendship to rest or will Jacob (Jake) and Belinda settle their differences and kiss and make up. Witness too, if Jacob, Rick, Belinda and Heidi (Kylie) will resolve their conflicts and find it in their hearts to forgive one another. With bonds they have built, will the barkada's friendship last until forever?