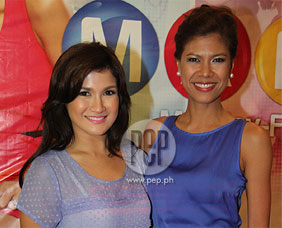 "Mars" is a shorter version of "kumare," which is a term of endearment among girl friends.

On the one hand, 26-year-old actress Camille Prats, while she practically grew up in front of the camera, felt nervous about the job she was offered. She has never hosted a talk show in the past.

It was comforting, however, for the Luna Blanca star to have Suzi as her partner. Camille reveals that she has worked with Suzi before when she appeared as guest in Suzi’s former talk show, Full Time Moms. She remembers the delightful chit-chats they had.

Now the two entertainment personalities, who both happen to be mothers now, will be seen on air weekdays at 6:10 in the evening for some girl time like no other.

Their show, Mars, promises to connect with women— mothers, sisters, aunts, girlfriends, even young adults— who take pleasure in engaging in fresh, fun, hip, and sometimes edgy conversations about the latest trends, current issues, and everyday situations that are not commonly tackled in ordinary talk shows (I.E. What if kids accidentally catch their parents doing the act?) Mars will likewise feature real-life stories of celebrities and regular mothers, homes, also cooking and exercise sessions.

"It’s also nice that Camille and I have a 32-year age gap," Suzi teases. "You can see that your market can be anyone. It can be a friend, it can be an ate, it can be a tita. Market mo pa rin sila, in a way. ‘Di lang kayo magkaka-age but your experiences are all different." Mars can also be an avenue for opinions, views, and ideas among women who will share in the banter and laughter of the hosts and their guests.

Though serious yung usapan namin, we can make it fun and light. Ate Suzi’s very giving when it comes to that… She’s also helps me to give out my opinion. Hindi yung siya lang palagi yung nagsasalita."

Camille feels lucky to have Suzi as a co-host. "Napakasarap niyang kabatuhan [ng linya]. Napaka-sarap niyang kausap…" When they taped their first episode, it calmed her when Suzi advised, "Para lang tayong nagchi-chikahan in front of the camera."

Meanwhile, Suzi, has found Camille to be a competent co-host. "She’s wonderful, I must say. She’s so young, ‘di ba? Pero very wise.