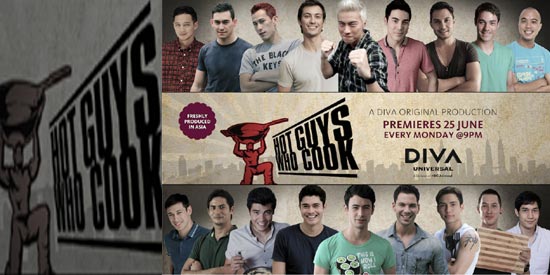 The kitchen will not be the only place steaming up when Hot Guys Who Cook premieres on June 25, 9 pm on cable channel Diva Universal.

Viewers can expect a feast for their eyes and appetite as this DIVA Universal original brings up close and personal 18 of our favorite hottest guys from around Asia, over six episodes.

Each half-hour episode will sizzle with three Hot Guys, each cooking their signature dish under seven minutes.

While slaving over a stove, the guys will be sharing endearing stories and anecdotes on cooking and some personal experiences.

Equipped with charming personalities and good looks, the Hot Guys will tantalize and titillate the senses of viewers, proving that cooking shows may not have to be just about culinary skills or Michelin-starred food.

David Gunson, Vice President of South East Asia Channels, Universal Networks International said, “Women today are more in touch with what they want, and are unabashed about it. A show like Hot Guys Who Cook will greatly appeal to our viewers in a fun and candid way.”

Hot Guys Who Cook premieres on June 25 and will air every Monday at 9pm on cable channel DIVA Universal.