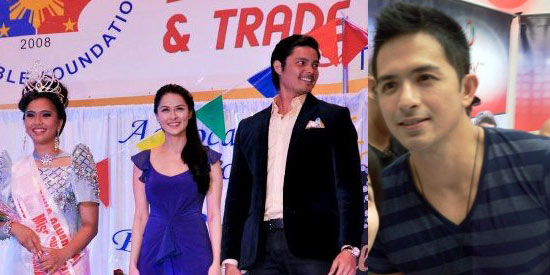 The Kapuso Network, through its international channels GMA Pinoy TV and GMA Life TV, was at the heart of the Philippine Independence Day celebrations this year as it brought Filipinos from all over the world closer to home through various, highly successful events attended by today’s brightest Kapuso stars.

Records from the different organizers show that the events participated by GMA International attracted the biggest crowds among all the Independence Day celebrations in their respective areas.

Last June 9, GMA primetime stars Dingdong Dantes and Marian Rivera joined the festivities at the Pinoy Fiesta and Trade Show Sa Toronto, an event organized by the Philippine Canadian Charitable Foundation (PCCF) and the Philippine Chamber of Commerce Toronto (PCCT). The reel and real life couple graced the Miss Philippines-Canada pageant, where Dingdong and Marian awarded the winner and performed before their screaming fans.

According to PCCF and PCCT, the event drew an estimated audience of more than 14,000 people – the biggest turnout from any Filipino-Canadian event since the Centennial Philippine Independence Anniversary with some coming all the way from Chicago, New Jersey, New York, Montreal, Hamilton and Kitchener.

Over at New York City, Dingdong Dantes, Rachelle Ann Go, and Aljur Abrenica joined the Philippine Independence Day Parade last June 3 on Madison Avenue, which attracted an overwhelming crowd of 80,000 to 100,000 spectators, according to a press release from the Philippine Consulate General New York. Despite the rain, excited fans and onlookers filled the streets as they eagerly waited to catch a glimpse and take photos of the Kapuso stars who participated in the colorful celebration.

From the Big Apple, Aljur and Rachelle Ann headed over to the west coast at Carson, California last June 9 to participate in the 114th Philippine Independence Day Celebration held at the Veterans Park. According to the Philippine Independence Day Foundation (PIDF), organizer of the Carson event, over 7,000 people flocked the venue. Just as Rachelle Ann mesmerized the crowd with her beautiful voice, Aljur elicited loud cheers as he serenaded the audience with a medley of love songs before engaging in a dance showdown with Rachelle Ann along with selected audience participants.

In recognition of their participation in the event, both stars received awards from the US Congressional, the City of Carson, and the PIDF, while GMA Pinoy TV and GMA Life TV received special recognitions from the City of Carson and Outstanding Achievement awards from PIDF. The awarding ceremony was graced by a number of VIPs including U.S. Congresswoman Laura Richardson, Philippine Consul General Jo Marie Aragon, PIDF President Jose Merton, City of Carson Mayor Jim Dear, and other Carson City officials.

At the Mabuhay Fiesta celebration in San Francisco, California held last June 16 and 17, thousands gathered to see Rhian Ramos, Jay-R, and Aljur perform on stage together with Krista Kleiner and GMA Pinoy TV’s The Sansu Show host, Susan Ramsey. Fans of Kapuso stars were excited to meet them in the morning of June 16 at the Serramonte Shopping Center. Organized by Diversity Foundation, Inc. the fiesta also showcased local talents, food, arts, as well as a wide range of Pinoy products as the event aimed to generate awareness and appreciation for Philippine history and heritage in the Bay Area.

GMA International also reignited Pinoy pride in the hearts of Filipinos in the Middle East as GMA Pinoy TV and GMA Life TV took part in the Philippine Independence Day Celebration in Dubai last June 8. Jennylyn Mercado and Jay-R reveled in the festivities at the Al-Safa Stadium, where they performed song numbers and interacted with the audience. Kapuso fans also had a chance to see their idols up close during the meet and greet which took place before the program.

Known as the only Philippine Day Celebration recognized by the UAE government, the Bayanihan Festival is co-organized by the Consulate General of thePhilippinesand FilCom Dubai, an umbrella organization of over 100 Filipino organizations in Dubai and the Northern Emirates. GMA International, through OSN, has been participating in this annual celebration since 2008 and has contributed largely to the growth of GMA International in theMiddle East, its second largest territory.


Award-winning Kapuso actress Lovi Poe graced the Charity Ball on June 9 at Shangri-La Kowloon and the Philippine Association of Hong Kong (PAHK) Independence Day event on June 10, which, according to PAHK, drew the largest crowd in the last 50 years of the annual event’s existence.

Consul General Noel Servigon and PAHK Chairman Rodel Bicol expressed their sincerest thanks to GMA International for continuously supporting PAHK and for providing OFWs in Hong Kong the much-needed respite from their everyday work.

GMA International rounded out this year’s celebration of Philippine Independence with the participation of Dennis Trillo and Lovi Poe in the Sama-Sama sa Kalayaan at Kasiyahan! event in Singapore last June 17. Before a jampacked crowd at the Atrium in Suntec City, Dennis and Lovi entertained the audience with song numbers before hosting a meet and greet for their Filipino fans.

According to Jhaney Lizo, managing director of XACT! Management and organizer of the Philippine Country Fair 2012, a crowd estimate of 2,000 individuals attended the June 17 event, while the Philippine Country Fair, which took place from June 14 to 16, attracted a combined crowd of 10,000 people. Pastor Ray Solano, PIDC Chairman in Singapore, considers GMA International’s participation in both events a “blessing” as it provided “much color and spirit to the celebration.”

GMA VP for International Joseph T. Francia sums up what it means for them to participate in the commemoration of Philippine Independence Day across the globe. “Seeing our kabababayans come together as one and celebrate an important event in our history gives us great joy and fulfillment. We are simply touched by the overwhelming turnout for the events, and feel all the more inspired to continue on with our mission of bringing Filipinos closer to home with superior and worthwhile entertainment.”