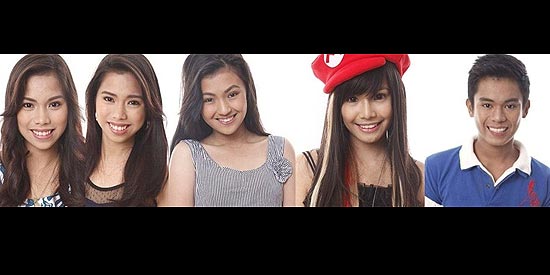 Twin housemates Joj and Jai Apangan, who were proclaimed part of the Teen Big Four, will join Karen Reyes, Myrtle Sarrosa, and Roy Requejo in the “BFF at the Big Night.” It will be held at the Malolos Sports and Convention Center this Saturday (July 7).

With the eviction of Ryan Boyce five nights before the program’s finale, the “Double Biba of Bacolod” were hailed as the first twins to ever join the Big Night of ABS-CBN’s reality show after they were saved by the public in the open voting conducted last week.


BIG JUMP TO THE BIG NIGHT. Last week, the “Big Jump to the Big Night” was a major challenge for the Pinoy Big Brother teen housemates. Alec Dungo, Joj Apangan and Roy Requejo were the housemates who participated in Big Brother’s challenge. The winner of this challenge were assured a slot in the “Big Four.”

During the challenge, Big Brother tried to tempt Alec, Joj and Roy to back out by offering P50,000 cash and a sumptuous feast that all the housemates can sample. Strongly determined, all three remained unfazed by Kuya’s temptations.

One of the housemates, Alec had to quit the challenge due to physical exhaustion. Alec tried to hang on but he reluctantly had to let go. The good-looking chinito felt really disappointed.

With Alec out of the game, it was a match between Joj and Roy. As they reached their seventh hour, Big Brother decided to “toughen” the challenge by adding weight to the luggage equivalent to 10% of the respective body weight of each housemate. Joj tried her best but struggled in the end. As a result, Roydubbed as Ang Boy Sipag ng Naga, won the challenge.

From among the remaining housemates, Alec got the lowest number of votes with only 5.35%.

In a previous interview with The Buzz, Alec admitted that he wants to continue courting Jai when she exits the Big Brother house.

RYAN BOYCE EXITS PBB. Last July 2, Toni Gonzaga and the rest of the PBB hosts announced who the fourth member of the “Big Four.” It was a toss up between Ryan Boyce and the twins Joj and Jai Apangan.

During the live show, Toni had a casual chat with the twins and Ryan before disclosing who was evicted. She asked them to point out the reason why he or she should be declared the Big Winner. Jai said, “Dahil po simula pa sa huli, nagpakatotoo lang po ako. Natural po lahat yon.” Joj pointed out: “Naging masayahin ako at naging masayahing bata” while Ryan simply stated that “naging mabuti po akong ehemplo.”

The singer-actress host kept the twins and Ryan to the edge of their seats. She finally disclosed that Jai and Joj are officially part of the “Big Four,” making Ryan the last teen housemate evicted from Kuya’s house.

It was an emotional time for Ryan who is dubbed as the Pilyong Binatilyo ng Angeles. As he bade farewell to the housemates, Ryan’s girlfriend, Karen, wept loudly.

Ryan, who hails from Angeles, Pampanga, got 6.36% share of votes, being the second housemate lowest in ranking. The lowest vote scorer was Alec Dungo who was evicted last Friday, June 29, 2012.

Joj and Jai was the fourth placer in terms of vote ranking with 9.85%. The identities of the top three housemates who got the highest share of votes ranging from 12.10%, 26.76% and 39.58% were not disclosed.

The housemate who will get the highest average net votes will be hailed as the Teen Big Winner and take home P1 million, a gadget showcase, an appliance showcase, and an Asian tour package.

Catch who will come out victorious in the “BFF at the Big Night” on ABS-CBN, live from the Malolos Sports and Convention Center, 9 p.m. this Saturday (July 7).