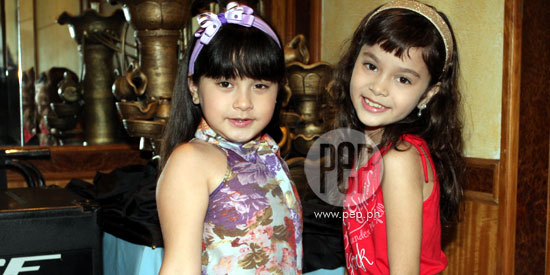 The first phase of GMA-7’s primetime drama series Luna Blanca that features child stars Jillian Ward and Mona Louise Rey is about to end this week.

Their characters, twins Luna and Blanca, will be separated from their mother Rowena, played by Camille Prats, in a series of tragic events.

Blanca was taken away be her adoptive guardians while Rowena and Luna were forced to live in a dumpsite.

While working on a mountain of garbage, a landslide will occur that will separate the mother and daughter from each other.

At the pocket presscon for the two little girls last July 5 at GMA-7’s Executive Lounge, PEP.ph (Philippine Entertainment Portal) had a little chit-chat with Luna and Blanca.

We asked Jillian if the black body paint she wore to be transformed into her character bothered her.

She also told PEP.ph that the black paint is what she will miss the most about her character.

Mona, on the other hand, will miss the stars she worked with.

When asked what other roles they would like to portray, neither of the kids were choosy about their parts. They would gladly take on any character assigned to them.

With their talent and charm, we can expect these girls to still be in the business for years to come. Who else are they dreaming of working with?

For Jillian, she has worked with most of the Kapuso network’s biggest stars expect for one that she dreams of most: “Si Tita Regine [Velasquez] po. Pero parang lahat po nakatrabaho ko na.”

For her part, Mona would like to work with some of this generation’s hottest Kapuso stars, “Si Ate Marian [Rivera] po at si Ate Lovi Poe at si Ate Rhian Ramos.