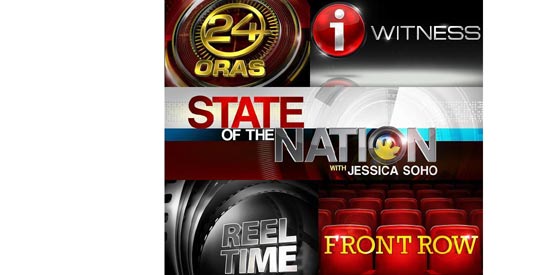 GMA News and Public Affairs has received a total of five Certificates for Creative Excellence at the 2012 U.S. International Film and Video Festival (USIFVF).

GMA Network’s flagship newscast 24 Oras presents the touching story of 78-year old Aurelia Matias and her search for her missing husband, Luis. A photographer posted a heartbreaking picture of Aurelia waiting for her lost husband on social media. The post went viral and soon after, Lola Aurelia was able to find her husband. 24 Oras exclusively captured the tearful reunion of Lola Aurelia and Lolo Luis, their love warming the hearts of millions nationwide.

I-Witness’ Gintong Putik takes Peabody awardee Kara David to the town of Paracale in Camarines Norte where she meets children burrowing for gold in the rice fields.

According to the USIFVF website, “True to its title State of the Nation, this particular coverage of a breaking story merits consideration as it does not only report the heart-wrenching state of the community during the tragedy, it also called the entire nation to come together and share assistance with the victims. Donations both local and international poured in days after.”

Front Row's Yaman sa Basura, which features children who engage in hazardous urban mining at the Smokey Mountain, and Reel Time's Lusong, a story on families who dive into the dirty waters of Manila Bay in search of trash to sell, were also winners at the 2012 New York Festivals.

GMA Network and GMA News TV’s entries are the only USIFVF winners from the Philippines this year.