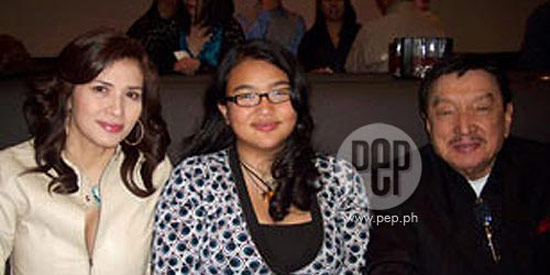 ASAP stars condoled with Zsa Zsa Padilla (left), Zia Quizon (middle) and the Quizon family on the loss of their patriarch Dolphy (right).

Fondly referred to as Pidol, Tito Dolphy, Mang Dolphy, and known as Ompong to close associates, the King of Comedy made an indelible mark on local show business through 65 years.

Entering showbiz was not an easy path for Pidol. He started from scratch and worked his way to the top.

Dolphy became a chorus boy in Avenida, performed in bodabil (the Philippine version of the American vaudeville), and became part of the tap dancing team of the late Bayani Casimiro.

Like any aspiring actor, he did bit roles, played “extras” in movies, and started becoming known as an ace comedian. He also portrayed dramatic and gay roles. He starred in numerous films and worked with onscreen giants, including Fernando Poe Jr. and former President Joseph Estrada.

Dolphy had romances with a string of beautiful ladies, most of whom were his former onscreen partners. The popular comedian also became a producer of his own company, RVQ Productions.

A video presentation highlighting the Comedy King’s remarkable career was then aired on ABS-CBN's noontime variety show. It was a vivid capture of his multifaceted roles in theater, radio, TV and movies.

Gary Valenciano then took center stage and led the prayer for Dolphy, who died of multiple organ failure on July 10, 2012.

“Lord, naniniwala ako na kung i-replay ang lahat ng ginawa niya, we will still have him for years on a daily basis.

"Minsan, Lord, we thank you for people that are not a part of us or our families but who treat us or made us feel that we were part of his family.

"Thank you for Tito Dolphy, for Mang Dolphy, for Pidol or Kevin Cosme or for all the characters he has played.


"Kami po dito sa ASAP 2012 Lord, we give you the glory, honor and praise, hindi lang para sa ngayon but for the generations to come that will be touched by this man, Dolphy.

"The one and only and forever will be, the King of Comedy in the Philippines. In Your Name, Jesus, we pray. Amen.”

As Gary led the group in prayer, many Kapamilya stars were visibly saddened by the demise of the Comedy King.

"Some of them became teary eyed, like Vina Morales, while others, like Aiza Seguerra, were seen shedding tears for the veteran actor-comedian.

Known for his unforgettable characters John Puruntong and Kevin Cosme, Dolphy truly left a legacy of laughter and warm memories for his millions of fans here and abroad.