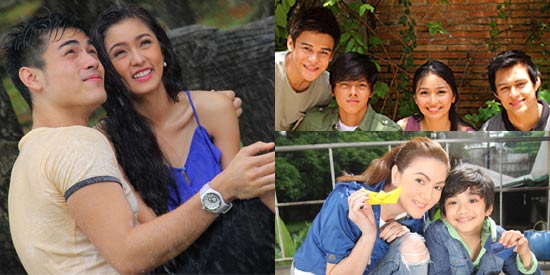 With a theme song sung by Toni Gonzaga, the Ulan Station ID was led by John Lloyd Cruz and Bea Alonzo.

The loveteam partners unmindful of the rain performed the so-called dance of love and passion—the tango.

Daniel and Katerina of Walang Hanggan played by Coco Martin and Julia Montes, also shared tender moments under the raindrops together with co-stars Paolo Avelino, Melissa Ricks, and Joem Bascon. Meanwhile, Kahit Puso’y Masugatan love triangle Iza Calzado, Andi Eigenmann, and Jake Cuenca showed how the rain can wash away the tears brought about by love.

Princess and I stars Enrique Gil, Khalil Ramos, Daniel Padilla, and Kathryn Bernardo as well as Aryana cast members and Paul Salas, Dom Roque, and Ella Cruz also had their fair share of "kilig" moments in the said station ID.

Viewers also get a glimpse of the onscreen chemistry of ABS-CBN’s upcoming loveteams. These include Martin Del Rosario and Denise Laurel for Precious Hearts Romances presents Pintada; Jessy Mendiola and Matteo Guidicelli together with Matt Evans and Jewel Mische for Precious Hearts Romances presents Isla; Kaye Abad and John Prats for Angelito: Ang Bagong Yugto; and the return of Xian Lim and Kim Chiu together with Enchong Dee and Maja Salvador in Ina, Anak, Kapatid.

Also featured in the station ID are Jodi Sta. Maria and Richard “Papa Chen” Yap, the newest and only loveteam in the morning block from PrimeTanghali’s teleserye Be Careful with my Heart. Afternoon programs are represented by JM De Guzman and Charee Pineda (who portray Angelito and Rosalie, respectively) in Angelito: Batang Ama. The unlikely couple Zaijian Jaranilla and Carmina Villarroel, lead stars of Lorenzo’s Time, play with paper boats in the station ID.

Host-actress KC Concepcion gets a spot number without a loveteam partner.

The theme song with the same title was performed by Toni Gonzaga.