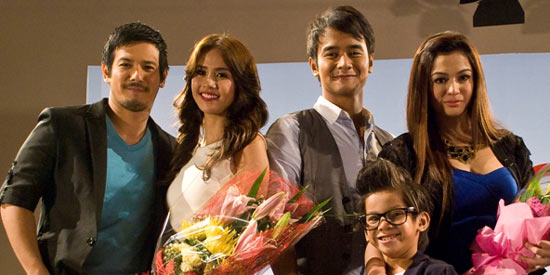 After enduring the struggles and responsibilities of a teenage father, Angelito opens a new chapter in his life, now as a family man, in Angelito: Ang Bagong Yugto. This afternoon teleserye premiered on Monday (July 16) in Kapamilya Gold.

According to ABS-CBN, they are bringing back Angelito: Batang Ama to television due to insistent public demand.

The story opened with Angelito and Rosalie finally tying the knot and starting anew as Mr. and Mrs. Angelito Santos. After all the struggles they went through in the past, the two are poised to face tougher challenges as they support a family and provide for the needs of their son Jun-Jun (Joshen Bernardo).

But their love will once again be put to test when Jenny returns with a big revelation.

When Jenny left for Singapore also to start anew, little did she know that she is already pregnant with Angelito’s child after one night of passion. Jenny then reconnects with her childhood friend Raffy who will help her during this difficult time. Raffy, who has always loved Jenny, accepts the responsibility of being the father of her child.

Even though Jenny has already decided not to bother Angelito, an incident will leave her no choice but to go back to the Philippines and reveal the truth about their child.

How will Angelito react to this revelation? How will he deal with the fact that he has fathered two children with two different women? How will Rosalie accept the fact that Angelito has another child? How will this affect their bond? Will Jenny fight for her child’s right? How will Raffy face the man Jenny used to love?