HBO's The Newsroom depicts the drama behind broadcast journalism 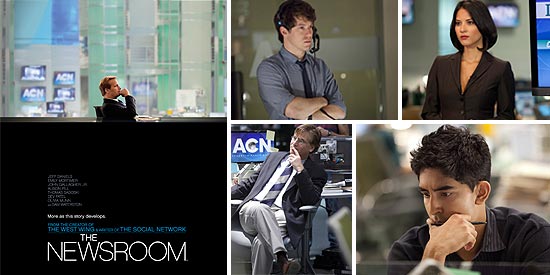 From the creative mind of Aaron Sorkin, the man behind The West Wing and the screenwriter of The Social Network and Moneyball, comes The Newsroom.

HBO Asia in collaboration with Sky Cable and ABS CBN News Channel (ANC) gave select members of the press a sneak preview of the first episode of The Newsroom series. They also provided a mini tour of ANC’s newsroom last July 17, at the ELJ Communication Center, ABS-CBN compound, Quezon City.

The Newsroom is an American drama television series that chronicles the behind-the-scenes events at the fictional Atlantis Cable News (ACN) channel. This ten-episode series will follow the news team on their mission to reclaim the legacy of news legends Murrow and Cronkite in the face of a fickle audience, corporate mandates and tangled personal relationships.

The stories covered in the series are based on actual past news events. Get to learn how people in a newsroom select and edit the news to be broadcast on TV.

Aside from depicting the fast-paced life of broadcast journalists, this new HBO program will show viewers the dynamics of people working behind the camera for a news program, how to work with an ex-lover, how to take your knowledge to a higher notch and so much more.

THE PLOT. In a literal blink of an eye – or perhaps an optical illusion – Will McAvoy (played by Jeff Daniels) is catapulted from apathy to engagement when a spontaneous outburst leads him to tackle the principles of American patriotism in a public forum. Surviving the professional fallout from his unexpected outburst following an enforced vacation, McAvoy returns to work to discover that most of his staff has jumped ship for another show and is forced to work with several new team members brought on board during his absence.

A sneak on the pilot episode. After surviving the fallout from a meltdown, ACN News Night anchor Will McAvoy returns to his job and finds that his executive producer and most of his entire staff are leaving his show. Will learns he has been assigned a new executive producer: MacKenzie McHale, a former girlfriend. Will and his overhauled staff face an immediate challenge when breaking news comes over the wire.

Cast and characters. The Newsroom features an ensemble cast including Jeff Daniels as Will McAvoy. The anchor and managing editor of News Night, he is a moderate Republican whose success is largely the result of never offending anyone. He’s in a lot of pain and that manifests itself in a grumpy exterior when he’s off-camera.

Sam Waterson is cast as Charlie Skinner, the unapologetically old-school president of the news division.

John Gallagher, Jr. as Jim Harper. He is a producer who was offered another job when MacKenzie's previous show was cancelled but turned it down to follow her to News Night. At his new job, he develops feelings for Maggie.

Alison Pill as Margaret Jordan. She started as a News Night intern and quickly promoted to associate producer. Her smarts equal her lack of experience and lack of confidence.

Thomas Sadoski as Don Keefer is News Night's former executive producer who leaves for the new program on the network.

Dev Patel as Neal Sampat. He is the ghost writer of Will's blog and scours the internet for stories and leads others have missed. Just 21, he’s a self-made newsman.

Olivia Munn who plays Sloan Sabbith, is the network’s financial news reporter. Sloan could be earning much more money as an analyst at Goldman, but her calling is economic reporting.

Learn all about the drama behind the news in The Newsroom when it premieres on August 1, Wednesday, at 9pm on HBO and at 8pm on HBO HD.