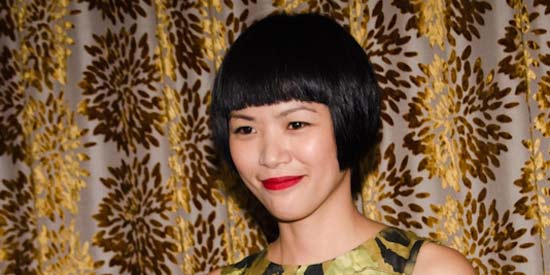 It took a month before fashion designer Milka Redoble believed that she won the title of Project Runway Philippines Season 3.

The fashion competition for aspiring designers already wrapped up early last month, but the final episode aired only last July 1.

Thus, it is only now when Milka is allowed to talk about her victory. For this purpose, PEP.ph (Philippine Entertainment Portal) and other members of the press met Milka for an interview last July 5 at a coffee shop in Ortigas.

Milka talked about her experience as the third title holder of ETC channel’s reality TV show.

Aside from the bragging rights, Milka was also given a handsome set of prizes.

Milka proudly counts each reward. “Basta alam ko lang, may 500,000 cash prize for starting up your business, from Pond's 150,000, and then the Paris trip, and the iAcademy scholarship. Also, the Brother sewing machines.”

All these will help her open a boutique, a dream that she has yet to fulfill.

ONLY A TICKET. The humility and subdued energy Milka is showing comes from the fact that she did not expect to win at all.

For one, she did not begin her professional life in fashion. The 35-year-old designer worked in a bank and a call center company before focusing on clothing technology.

“I was working in a bank, and then I switched careers. I worked in a call center for a long time, and after that, I stopped working, kasi we had to go to Madrid, kasi yung husband ko was working there,” she narrated.

Before going to live abroad, Milka studied in Philippine fashion schools, because she hoped that she can start a fashion career in Europe.

But after a while, she learnt that she’ll have a better shot joining Project Runway Philippines. So that’s what she did.

STARTING OUT. Competing in the reality show was not that easy for Milka. A lot of stress and pressure were involved, on top of a handicap she thought she had: her competitors were in the fashion industry longer than her.

“When I got in, nalulula ako na, uy, kakilala nila si ganitong fashion designer,” she said.

So it was surprising when she won the first challenge.

Going further into the competition also made her relax, as she became friends with her fellow designers.

“Ito ang best na takeaway ko dun, I met a lot of people and I had good relationships with them,” Milka said.

ONLY A TICKET. Milka hopes that all the relationships she established while on the show will come in handy when she’s already working in the fashion industry.

For her, winning Project Runway only serves as a ticket to the industry, and not a crown that automatically gives her license to be aligned with the country’s best designers.

“It just gives you the ticket, but it doesn't give you the right na eto na designer na ako,” Milka said.

To Milka, fashion is an unending effort to be grow. For her, it is work ethic that matters, and not any achievement.

“Alam mo, sa totoo lang, yeah, you won. It's really good that you won and you got to show your pieces. Pero hindi! Work pa rin! Sumasali ka pa lang sa pool of designers na matagal na sa industriya, so what do you do? Siyempre, you still work,” she pointed out.