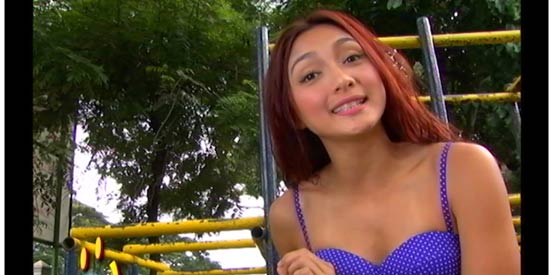 From hosting a lifestyle TV show, Iya Villania shifts to hosting a gag show called Gag U on Studio 23.

Every Sunday night, the former US Girls host brings laughter to viewers through this 30-minute program that will showcase wacky foreign videos as well as funny Pinoy jokes and pranks.

“Actually it’s something really different ‘cause I’ve never done a gag show,” said Iya Villania in an interview with PEP.ph (Philippine Entertainment Portal) and other members of the press recently.

“We don’t make joke about anything we do there.

“This is very different, the mere fact that it’s a gag show so, exciting.”

Does Iya think she’s funny enough to pull off her new job as host of Gag U?

“I used to question it,” she laughed.

“But you know what, it’s an opportunity that was given to me and I trust the bosses.

“Hindi naman siguro sila magde-decide nang basta-basta. Natutuwa naman ako that [they] really believe in what I can do.”

For this show, Iya said she did not have to prepare to look perky on the screen.

Gag U will be divided into four segments.

In “Versusmaryosep,” Iya will try to see how boys fare doing girly stuff and vice versa.

“Karatulaugh,” on the other hand, will show how Pinoys can sometimes be ridiculously wrong in making signages.

Then, in “Newskopo,” viewers will be updated with the latest news and current affairs but with a twist.

Lastly, Gag U will also have a part where Iya will introduce gags from around the world that features cute pets, adorable babies, pranks caught on hidden cameras, home videos, and a lot more.

Every month, Iya will be joined by a gagster or a celebrity guest to help her pull off pranks on public places.

Gag U airs every Sunday at 6 p.m. after the UAAP coverage on Studio 23.