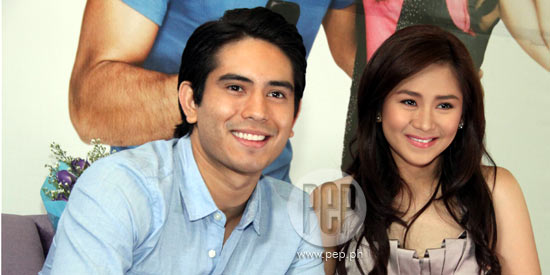 Deafening shrieks from avid fans were heard as soon as Gerald Anderson made a special appearance in the weekly musical variety show Sarah G LIVE!

The July 22 episode was particularly special since it served as the birthday celebration of Sarah Geronimo, who is turning 24 years old on July 25. Since Michael Jackson is Sarah's ultimate idol, her birthday show mostly featured songs of the King of Pop.

Mr. Pure Energy Gary Valenciano and son Gab also did a special number with Sarah that delighted a lot of fans.

The Popstar Princess recently staged a two-night birthday concert at the Smart Araneta Coliseum that was a smashing success. Despite the heavy rains, the show of support from fans was overwhelming. In fact, the July 7 edition of the concert was made even more special when Sarah approached Gerald (who was sitting in the audience) while singing “It Might Be You.”

The loveteam partners held hands as they walked together towards the patron section of the Big Dome.

For the July 22 episode of Sarah G LIVE!, co-host Luis Manzano facilitated a unique interview of the lovely pair. But instead of asking questions directly, Luis explained that the interview will be “song-driven.” This meant that a song would be played before he poses questions related to that particular song.

The first song played the song was “One Hello.” When did “One Hello” become meaningful to Sarah and Gerald?

Gerald was rendered speechless by this question.

The second song played was “Fallin.’”

What were Sarah's traits that prompted Gerald to “fall” for the singer-actresss?

The controversial “Babe” video was then played, which is actually the much-talked about videoke session wherein Sarah called Gerald as “babe.”

Luis directly asked Gerald: “Is Sarah the ‘One’? Is Sarah worth waiting for?”

His answer elicited a lot of cheers from fans. Gerald revealed during this episode that he has been courting Sarah for 6 months already.

The final clip played was a segment of Sarah's recent concert at the Big Dome.

Luis focused his attention to Sarah and asked her, “During the concert, why did you approach Gerald when you started singing the song “It Might Be You”?

After the interview, Sarah and Gerald went onstage to express their personal messages for each other.

Gerald handed the birthday girl a bouquet of flowers and a gift-wrapped present that they both opened. First was a t-shirt with the word “BABE” printed on it. His second gift was an elegant clock.

Fans shouted for joy in response to Gerald’s declaration.

While holding hands, Sarah ended the show by performing “Music and Me” with Gerald by her side.