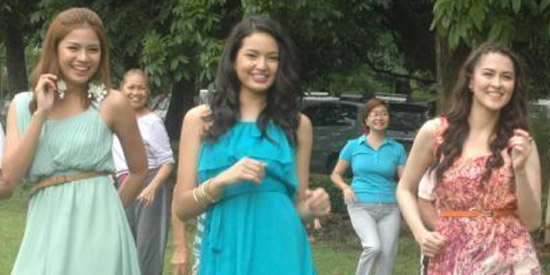 (From left) Louise delos Reyes, Sarah Lahbati, and Marian Rivera are some of the Kapuso stars featured in the 2012 station ID of GMA-7. The 4-minute station ID will be seen on television beginning August 6, 2012. It will also be shown in SM cinemas nationwide starting August 8.

"GMA Network, Inc. (GMA) is creating a buzz among TV viewers with the launch of its new Kapuso Station ID this Monday, August 6, during its primetime newscast, 24 Oras.

"The 4-minute Station ID signs-on and -off GMA’s programming beginning August 6, 2012. It will also be shown in SM cinemas nationwide starting August 8.

"One of GMA’s core values says, 'we believe that the viewer is boss.' GMA Chairman and CEO lawyer Felipe L. Gozon says that, “the Network’s content-creation, programming decisions, and public service efforts are always based on the viewers’ wants and needs. This is one of the guiding values that has brought us to the leadership position we now hold."

"GMA President and COO Gilberto R. Duavit, Jr., adds that "this station ID celebrates our Kapuso relationship with our viewers and serves as an opportunity to show how important this relationship is to us."

"GMA VP for Program Support Regie Bautista agrees, saying that: “since this Station ID shows how valuable our viewers are to the Network, all groups involved in the planning and execution of this Station ID gave it their 100% support. Our stars and personalities made it a point to adjust their hectic schedules to be part of this undertaking. This Station ID reaffirms to our viewers that they are the driving force behind everybody in GMA.”

"In its vignettes, the 2012 GMA Station ID shows what lies at the heart of GMA Network. Kapuso personalities are shown holding up photos of viewers from all walks of life who inspire them in their craft.

"Husband and wife Ogie and Regine Alcasid are seen in their home, holding up the photo of a family, together with the youngest Kapuso personality in the SID, our very own baby Nate Alcasid.

"Multi-talented actor Dingdong Dantes, who advocates education for the youth, is seen showing off his photo of students to fast-rising stars Mikael Daez, Benjamin Alves, and Alden Richards.

"The soundtrack of the 2012 GMA Station ID is a new recording of the Kapuso Theme “Kapuso, Anumang Kulay ng Buhay.” This latest version of the song is a dramatic duet sung by Asia’s Songbird, Regine Velasquez-Alcasid and YouTube singing sensation, Julie Ann San Jose. Starting August 6, the Kapuso Theme will also be heard on Kapuso radio stations nationwide.