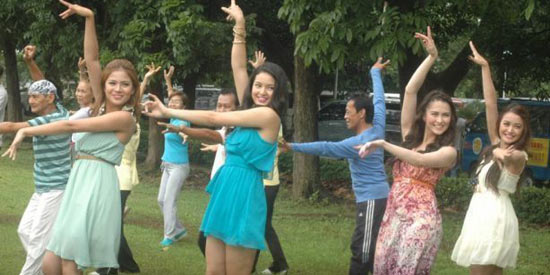 This question is the highlight of GMA-7's new station ID, the video that plays when the network signs on and signs off. It features the stars and celebrities that call the Kapuso station their home.

GMA-7 launched the "Kapuso" tag in 2002, the same year that its network war intensified against rival ABS-CBN. Since then, the two have occasionally released a succession of network IDs set to music.

GMA-7's new station ID is another embodiment of their "Kapuso" tagline. By asking the question "Sino ang nilalaman ng aming puso?" it establishes the idea that the "Kapuso" tagline is not only about the network's workers and stars, but about the viewers themselves.

The theme song boosts the video's heartwarming moments, showing the different aspects of the "Kapuso" mantra: love for family, forging friendships, and charity.

Kapuso viewers will not also be disappointed with the number of stars in the video. In the video are its top stars and other fan favorites. It even shows Ogie Alcasid and Regine Velasquez with their son Nate.

One glaring omission in the station ID is Claudine Barretto.

One negative thing that can be said is that the slow song could be a little boring, and at times seem disconnected from the fun and laughter that the video is showing.


In a previous statement, it was reported that “multi-millions” were spent for this station ID and that the technology used are of the “same standards as those used in Hollywood movies such as Transformers and Avengers.”


However, given the simple concept of the station ID, the high-tech devices seemed under-utilized in this station ID.


But all in all, the new station ID is another good interpretation of GMA-7's Kapuso philosophy.