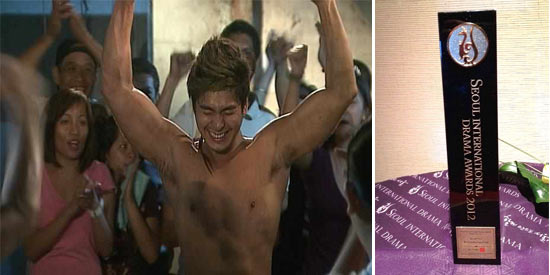 A release from ABS-CBN's corporate communications department quoted MMK business unit head Malou Santos as saying that the latest recognition from the Seoul International Drama Awards is an accolade they dedicate to the Filipino people whose tales inspire the two-decade-old drama anthology.

"We share this honor to the Filipino people who continue to awe us with their stories of hope and resilience,” shared Malou. “This is also a tribute not only to the artistry of the people behind MMK but more so to the nobility and strength of the ordinary people whose life stories inspire us the most."

Helmed by director Dado Lumibao, the episode was based on a true story of a war-freak underground boxer named Ramon (Coco), who, since childhood, has experienced pain in many forms.

MMK: Kamao was researched by Alex Martin and written by Benson Logronio.

Coco’s internationally-acclaimed MMK: Kamao episode will be aired again on ABS-CBN this Saturday (September 1) after Wansapanataym.

EPISODE STARRING SHARLENE SAN PEDRO TO COMPETE IN KOREA. Meanwhile, another MMK episode will compete in the 2012 Asia-Pacific Broadcasting Union (ABU) Prizes to be held in South Korea.

The MMK: T-Shirt episode, starring former child actress Sharlene San Pedro, is one of the finalists under the Television Special Jury Prizes category.

The finals of ABU Prize will be held in Seoul on October 16.

MMK: T-Shirt depicts the life story of a young girl named Gigi (Sharlene) who is raped repeatedly by her employer and goes on to brave the struggles of being a young mother.

The episode was chosen to compete with five entries coming from Bhutan, Vietnam, Indonesia, Mongolia, and Sri Lanka. The 2012 ABU Prizes finalists were chosen from 166 entries from 18 countries and 25 organizations.