Protégé announces Top 10 aspirants; the four mentors walk out of the GMA-7 show 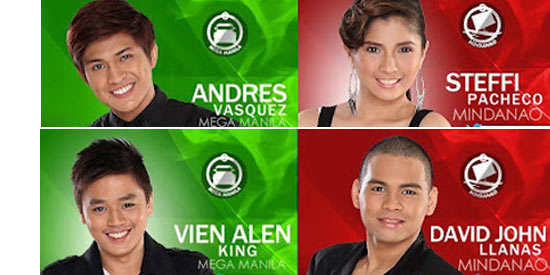 
"Three shocking and game-changing revelations happened in Protégé as the elimination night astounded viewers in the most controversial episode last Sunday.

"For the first shocking revelation this season, the protégés from the different teams were paired up into seven duos to showcase various themed performances.

"After the presentation, the bottom five protégés were announced. And in what seemed to be the second shocking revelation of the night, four protégés were sent home, sending everyone into an emotional overdrive.

"The protégés who got the boot were David John Llanas and Steffi Pacheco of Team Mindanao and Vien Allen King and Andres Vasquez of Team Manila.

"Meanwhile, Shelly Hipolito of Team North and Central Luzon advanced to the next round and made it to the Top 10.

"In what everyone thought to be the last twist of the night, the mentors were asked to choose only one protégé to remain in his/her team. In the case of NCR mentor Roderick Paulate and Mindanao mentor Phillip Salvador, who had one protégé left in the competition, that protégé would automatically stay in their respective teams.

"Being the first in line to pick, North and Central Luzon mentor Ricky Davao, gave the most unexpected and shocking statement of the night—that all the mentors have agreed and decided not to proceed, and would temporarily abstain in the selection process.

"Director Ricky got teary-eyed when he expressed his disappointment over the shocking twist, "The mentors have experienced tremendous shock tonight. All of us are very much hurt for our protégés and we have all decided not to choose tonight." Then, the judges walked out of the stage.

"Now, only ten protégés remain in the competition and they should work harder on their performances to impress and draw enough support from the voting public and the four judges.

"Catch up with the latest development on the lives of the Top 10 on Inside Protégé, which airs weeknights 10:30 pm after One True Love.


"They can also visit the website www.gmanetwork.com/protégé for daily updates in Protégé Webisodes."