Boy band Take Off eliminated from The X Factor Philippines 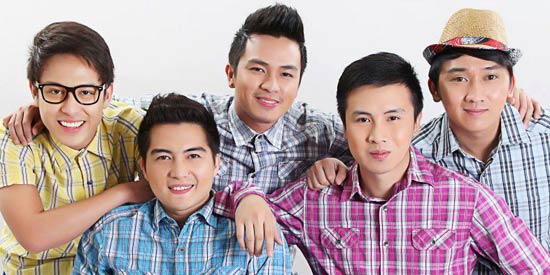 
Before the announcement, the 8 remaining contenders opened the show held at the Pagcor Grand Theater.

Daddy’s Home Jeric Medina, Kedebom Colim, Joan Da, KZ Tandingan, Allen Santamaria, Gabriel Maturan and Takeoff sang and gyrated to the beat of popular Filipino music. They performed with rock icon Pepe Smith who is dubbed as the “Mick Jagger of the Philippines.”

After the performance, The X Factor Philippines host KC Concepcion announced that voting for the remaining contenders was officially closed. Six of the eight contestants with the highest turnout of votes are considered “safe” for the week. The contestants with the lowest votes will be part of the “bottom two.”

The X Factor host announced the first contender who is considered “safe” that week. She called 20-year-old KZ Tandingan who was visibly very relieved. KZ is being mentored by Charice.

Another contender also safe this week is the all-male group, Daddy’s Home, which is being mentored by Gary V. The third contestant considered “safe” is Jeric Medina from Martin Nievera’s group.

Kedebon Colim, who was criticized by the judges for being off-key while performing “Kailangan Kita” last Saturday, still managed to move on to the next round. Kedebon is also being mentored by Martin.

The fifth contestant who will still see action next week is 16-year-old Allen Santamaria. Gabriel Maturan is the last “safe” contestant announced by the X-Factor host.

The bottom two contestants, Joan Da and the group Take Off, received the lowest votes. One of them will be eliminated.

Both acts were tasked to perform again on the show.

The first judge to be asked to vote was the Queen of the Songs. Ms. Pilita Corrales stated emphatically “I want Take Off to go home.” Charice remarked, “Performance-wise, pareho kayo [pertaining to Joan and Take Off], I think Take Off should go home.”

On the other hand, male judges Martin and Gary wanted Joan Da to go home. Martin pointed out, “Pareho kayong magaling. Everybody has a right point. But I think Gary has an edge. I think it’s better for the show, X Factor. I think Joan needs to go home.”

Since the judges reached a “deadlock,” a tie-breaker had to be done. To break the tie, the number of votes of the contestants were considered. The contestant with the lowest turnout of votes will be eliminated.

Take Off got the lowest number of votes and Joan Da is considered safe for this week. When asked to give their parting words, Takeoff told their fans: “We would like to thank all our supporters…we love you!”

For his final message, mentor-judge Gary V told Take Off: “I love you, guys. Sa lahat ng sumusuporta, maraming, maraming salamat. I will never give up on you. I believe in you guys and I always will.”

Who will emerge as the grand champion? The X Factor Philippines, hosted byKC Concepcion, airs every Saturday after Maalaala Mo Kaya and every Sunday, after Sarah G Live on ABS-CBN.