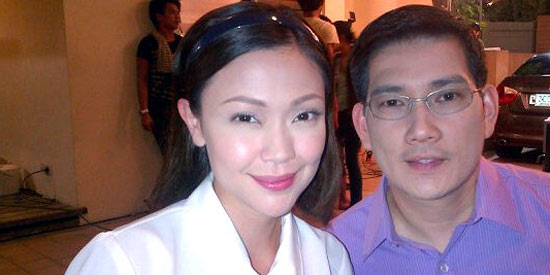 Jodi Sta. Maria and Richard Yap star in ABS-CBN's Be Careful With My Heart, which is performing well based on Kantar Media data.


"ABS-CBN Corporation continued its leadership in national TV ratings among urban and rural homes nationwide with the strengthened viewership of its morning block (6AM-12NN), according to industry-trusted multinational market research group Kantar Media.

"ABS-CBN further widened the lead in the morning block with an average morning audience share from 38% in last month to 41%, taking 3% shares from GMA-7’s 32%, now down to 29%. This lead was mainly brought about by back-to-back programs Be Careful with My Heart and Two Wives. The Richard Yap-Jodi Sta. Maria starrer hit a national TV rating of 22.6%, while the gripping Korean drama about two women who fell in love with the same man rated at 15.4%, rattling the morning landscape and trampling GMA-7’s Kapuso Movie Festival (8.4%) and Chef Boy Logro (9.9%).

"Kantar Media is a leading television (TV) audience measurement provider with capabilities in gathering TV viewing data in both digital and analog platforms. It now has total of 6.315 million homes in rural areas across the Philippines (North Luzon, Central Luzon, South Luzon, Visayas and Mindanao) added to its existing 8.820 million homes in urban areas, bringing the total TV universe to 15.135 million homes nationwide. Kantar Media’s audience panel now covers and represents 100% of the total Philippine TV viewing population. This is in contrast to other providers that cover only the urban areas representing only 57% of the total Philippine TV viewing population.

"The Kapamilya Network also maintained its primetime leadership for the whole month of August in viewer-rich primetime (6PM-12MN) when most Filipinos watch TV and advertisers put a larger chunk of their investment in to reach more consumers efficiently, as it garnered an average audience share of 49%, almost twice than GMA-7’s 29%. This translates to a solid 20 percentage point lead or nearly 70% higher viewing that its nearest competitor.

"This dominance was mainly driven by ABS-CBN’s top-caliber primetime offerings that continue to hold the top program rankings across the country in every region including Mega Manila.

"Kantar Media, meanwhile, reported that 13 Kapamilya programs secured the top 13 spots in the list of 15 most watched programs in the country in August, which was led by Walang Hanggan with an average national TV rating of 37.9%, followed by royal teleserye Princess and I, which rated at 36.4%.

"When it comes to current affairs programs, Rated K is still the undisputed leader with 26.3%. Kapamilya Deal or No Deal, on the other hand, remained as the only game show in the list with 22.7%.

"Meanwhile, Be Careful With My Heart (22.6%) claimed the ninth spot in the top 15 and made it as the only morning program on the list of the most-watched programs.

"ABS-CBN’s DZMM also continued its winning streak last July in Mega Manila by topping all AM radio stations with a 34% audience share, higher by 11 points than GMA-7's DZBB that only got 23%, according to the Nielsen Mega Manila RAM data.

"ABS-CBN registered a net income of P2.4 billion for the full year 2011, while news media reported that GMA Network net income plummeted to P1.72 billion in the same period.


"ABS-CBN shifted to Kantar Media/TNS after filing a case vs. AGB Nielsen Media Research for failing to comply with its request to investigate alleged cheating and data tampering in TV ratings. The case is still pending in court contrary to claims by GMA, which is not a party to the case, that it has been resolved."