The Voice “re-tweaks” previous format for its third season 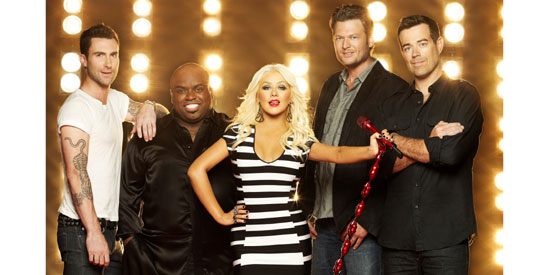 "Clinching four Emmy nods certainly bodes a good beginning for the premiere of the brand new season of The Voice on AXN.

"Winning the show’s first ever nod in the "Outstanding Reality Competition Program" category makes The Voice the only music reality series to be nominated in the category, beating out rival show American Idol, the first time in 10 years Idol has been left off the ballot.

"In 2011, the novel vocal talent reality series first made waves in the entertainment industry with its refreshing approach to sieving musical talents: by having the four coaches on spinning red chairs, theirs backs turned to the talents so that all they can rely on are their ears.

"The Voice Season 3 continues to up its ante with “re-tweaks” to its previous format.

"For one, viewers will get to see way more of what made the show tick and that of course, refers to the blind auditions.

"To spice things up, everyone’s favorite bit about the blind auditions—the spinning red chairs—will now be introduced to the battle rounds.

"According to host Carson Daly, the battle rounds will also be “playing with some potential interchangeability.” Here’s a long shot but our guess is that the judges might now be able to pinch an evicted member from a rival team.

"When asked about the new challenges to face in Season 3, here’s what coach Christina Aguilera has this to say: “It’s a great idea that keeps the show fresh and also keeps us coaches on our feet. Now with the steals we have to know our team and all the other teams as well so we can be strategic.

“I love the concept behind the show and celebrating the voice and the talent behind it.”

"Also, anticipate much stiffer competition from the contestants.

"The number of contestants has been lessened for this season. With fewer contestants, wise judgment calls have to be made by the four coaches and, for viewers, this means contestants of a higher caliber and more performances from each potential superstar the world has yet to meet.

"Even before the announcement of the new mentors, Cee Lo has already introduced everyone to his new paramour in tow, and one that might just overshadow Christina’s over-the-top head gear and low-cut tops.

"With Purrfect the Cat out of the picture, Cee Lo has picked up Lady, a pink Moluccan cockatoo, whom he met while ‘vacationing on Fantasy Island.’

"Aside from the same-week telecast and exciting rounds of blind auditions with the iconic spinning chairs, look forward to the playful banter among the four coaches.

"That, and the genuine rapports forming between the coach and contestant along the way, is what keeps viewers coming back for more.