The Manny Pacquiao-Juan Manuel Marquez bout emerged as most watched program, based on Nielsen data 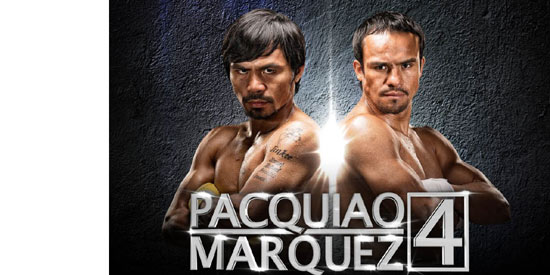 "GMA Network marked another winning performance as it continues its nationwide ratings lead over the weekend, according to data from the industry’s widely trusted ratings service provider Nielsen TV Audience Measurement.

"The Kapuso Network, likewise, delivered the most watched programming line-up last Sunday, December 9 (based on overnight data), after it registered 44.2 percent household audience share; 19.7 points ahead of ABS-CBN’s 24.5 percent and 32.4 points up from TV5’s 11.8 percent.

"Leading the way for GMA was the highly anticipated Pacquiao-Marquez 4 boxing special, which landed on the top spot of the overall top 30 weekend programs nationwide. The bout, which aired December 9, recorded a 37.1 percent average household rating.

"In the list of overall top 30 weekend programs (with specials) nationwide, 16 were from GMA. The [Manny] Pacquiao-[Juan Manuel] Marquez bout was at number one followed by the award-winning drama anthology Magpakailanman, which featured the touching story of Eat Bulaga’s Little Miss Philippines 2012 Ryza Mae Dizon. Magpakailanman posted 26.7 percent as against the 20.9 percent of ABS-CBN’s Maalaala Mo Kaya and TV5’s Talentadong Pinoy’s 9.4 percent.