Charice tells her special someone: "This is the last time I will fall in love." 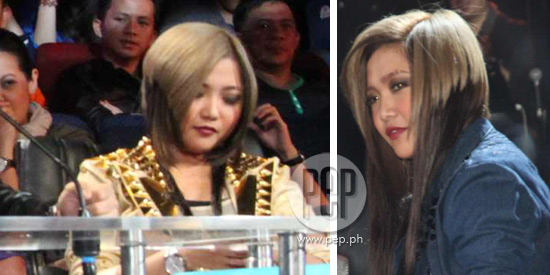 International recording artist Charice recently revealed her "other side” to Kris Aquino, the host of KrisTV. The 20-year-old singer used to have long black hair, but now she sports blonde hair and has several tattoos.

She showcased her new look when she was a judge mentor on The X Factor Philippines and earned a lot of admirers and detractors as well. Despite the barrage of talk that she has become swell headed and “prima donnanish,” Charice insists that she is the same person despite her new image.

Kris commented, “We’re so quick to judge yung panlabas and we forget the God-given talent is overflowing.”

With regards to her music, Kris asked Charice if her "sound” also evolved over the years?

During the show, the YouTube sensation sang a medley of songs including "Kung Ako Na Lang Sana," "Dahil Mahal Na Mahal Kita," "I’m Not Perfect," "If I Ain’t Got You," and "Because You Love Me." She also performed "Pusong Bato," which is the favorite song of the TV host’s children, Josh and Bimby.

When it came to matters of the heart, the TV host was visibly surprised when Charice revealed she’s in love. Charice gushed, "Ano po, oh my God, when I'm in love like this, I get crazy."

Though Charice admitted she is in love with someone, she didn’t divulge the identity of her special someone.

Kris then asked Charice to give a message to her special someone.

Charice said: "Sa iyo, [addressing her beloved] I just want to thank you for inspiring me. Thank you for loving me for who I am, for loving me. Alam ko na kahit hindi ganito ang status ko, you still love me. This is the last time I will fall in love."

Separately, Charice was interviewed on The Buzz last week.

Last October, Charice appeared in the movie Here Comes the Boom wherein she had the chance to act opposite Selma Hayek, Kevin James, and Henry Winkler. Adam Sandler served as the producer of this comedy film wherein the Filipina singer was cast as a high school student.


The movie premiered at AMC Lincoln Square in New York City last October 9. The Philippine premiere of Here Comes the Boom is scheduled on January 8, 2013.