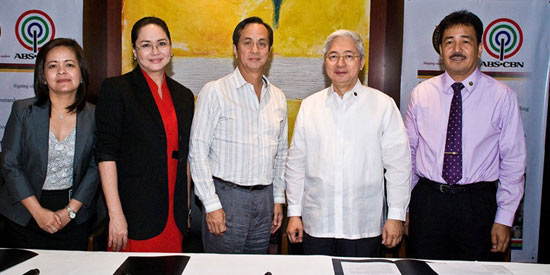 "ABS-CBN News and Current Affairs has partnered with the University of the Philippines system for the country’s first and biggest fact-checking project that will verify candidates’ claims in ABS-CBN’s “Halalan 2013” election forums and coverage, marking the first time a Philippine media organization will use the feature, which is standard in foreign news coverage and election debates.

"Faculty and experts from UP will appear in fact-checking segments to air on ABS-CBN’s TV and online platforms, a part of the collaboration between the network and the university to promote transparency and public participation among voters.

"Pascual called the partnership a new milestone for UP as it is the first time that the university system has officially partnered with a media organization to provide the media component for the elections.

"Santos-Concio said, “We believe UP’s role in nurturing future leaders will be a boon to Halalan 2013’s ‘Tayo Na.’ With the UP system as our partner, ABS-CBN is ever confident and optimistic that the coming elections will again show our citizen journalists at their finest.”

"Aside from fact-checking, the MOA will also create projects related to ABS-CBN’s election campaign “Bayan Mo, iPatrol Mo: Tayo Na” and voter information drives, including a microsite where overseas Filipino voters can get information on the 2013 elections.

"The micro-site will be featured in the websites of all UP units, constituent campuses, and UP Alumni Associations all over the world. It will not only teach voters how to vote but also how to choose among candidates, said Pascual.

"Aside from UP, ABS-CBN also signed a partnership with civic organization Regional Emergency Assistance Communications System (REACT) Philippines in gathering election-related news stories, including situational reports in the field from all over the country.

"REACT, which gathers and disseminates information to provide assistance during calamities and emergencies, has been ABS-CBN’s partner in news gathering since the 1992 national elections."