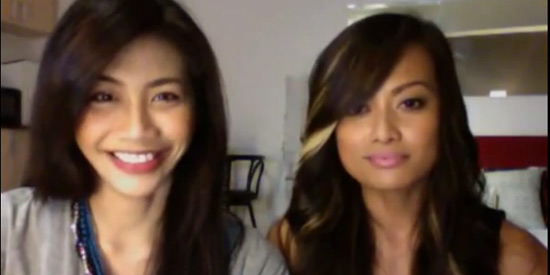 The Amazing Race Philippines’ Team SheenaGee, composed of reunited friends Gee Canlas and Sheena Vera Cruz, is one of the teams making a splash on TV5’s reality game show.


Their charisma and “sweet n tough” personas have attracted fans and followers online. In response to queries from their fans, the two held a “Q & A” segment and uploaded a video of themselves on YouTube.


Several questions were posted on Twitter and the spunky girls gamely answered them through their 8-minute video.

The first question asked was: How does Ate Gee speak so fast?


At that point, Gee gave a rapid-fire answer as if to demonstrate her skill that prompted others to dub her as “Speedy Gee.”


The former TV host admitted, “It’s more the words, the thoughts and you visualize it.”

Sheena added: “You connect whatever you see that pops into your head – freestyle and Rap siya…”


As for Sheena, she chose to answer the question: Where are you from? Bakit may accent si Ate Sheena?


The New York-based contender explained, “I grew up and I was raised in Guam, it’s a U.S terrority. I am based in New York but my family has been travelling all over the world ever since I was a kid. So ang first language ko is English. Kaya ko na ngayong mag-Tagalog… I’ve been taking Tagalog lessons.”


Sheena, who is a co-founder of the renowned hiphop dance group Philippine Allstars, recalled that during the bonfire episode of The Amazing Race Philippines, she resorted to using English. In this episode, Gee and Sheena had a confrontation with the other teams of TV5’s reality show. These included brothers-in-law, Fausto Reyes and Dayal Chowdary Jr., and celebrity best friends CJ Jaravata and LJ Reyes.


Sheena admitted, “Yung nangyari [sa bonfire], it would be so impossible to explain everything in Tagalog because at that moment, there was so much tension, of course, pressure for me to explain something in my heart. It has to be in English because yun talaga ang mas kumportable ako. Sorry for those people na nahirapan. I wanted to be as genuine as I can.”

Third question: When is the fans’ day?

Gee said with a smile, “Today is the fans day.” She then moved the webcam to show an electric fan that they had been using to give them a “windblown” effect.

Sheena added, “Every day is a fans’ day for team SheenaGee!”

The team mates are open to that and said almost in chorus, “Whoever wants to put up an official page, we appoint you.”

A lot of the followers wanted to know how to join the next season of The Amazing Race Philippines.

At first, the ladies humorously said, “all you have to do is sell your soul!”

Sheena dramatically added, “We sold our souls to The Amazing Race Philippines at nangitim kaming lahat sa middle of the ocean.”


Kidding aside, Gee stated, “Get someone you trust, someone that you’ve been close with talaga.”

Which team will bring home the title and the P2 million cash prize? Watch Team SheenaGee as they compete on TV5’s Amazing Race Philippines.