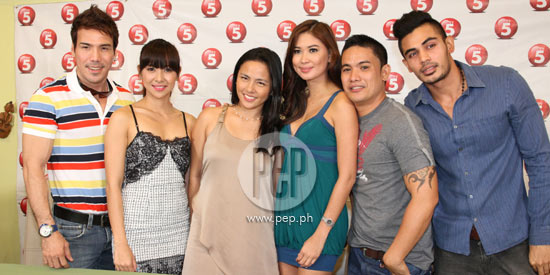 "The three-way battle for glory and PhP 2 million gets more intense as The Amazing Race Philippines (TARP) reaches the Final Pit Stop this Saturday (December 15) after Talentadong Pinoy Worldwide on TV5.

"After 12 gruelling legs which tested each team’s strength and determination to stay ahead of the game, the country’s biggest and most expensive reality show this year is set to begin its final leg in one of the world’s biggest cities, Davao, with the final three teams—LJ & CJ (team celebrity friends), Marc & Kat (team gym buddies) and Fausto & Dayal (team magbayaw).

"The Davao leg promises viewers some heart-stopping action as the last three teams will be put to test if they can get past the crocodiles and dangers of a motocross ride.

"With host Derek Ramsay, the 11 teams were able to explore the beauty of the Philippines as they traversed some of the best spots in the country. Kicking off the race in Manila, the teams journeyed to Ilocos, Mountain Province and Baguio in the north, Central Luzon’s Subic and Clark to the Southern parts of Albay, Cebu, Boracay, Sabang Island, Puerto Princesa, and Davao—in what could be the biggest and most exciting race of their lives.

"For the past six weeks, The Amazing Race Philippines has become one of TV5’s most top-rated primetime shows for 2012. To thank its loyal viewers, the 11 TARP teams held a grand fans’ day last Thursday at the Kapatid Network’s studio in Novaliches.

"Before its final episode on Saturday, don’t miss the thrilling back-to-back episodes this Friday (December 14) after Wil Time Bigtime. The producers will also showcase the show's special reunion episode after its finale on Saturday."