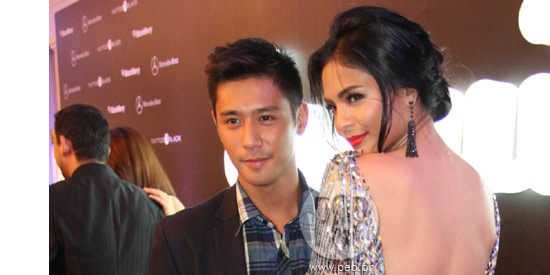 "GMA Network’s Afternoon Prime block continues to dominate television ratings with the success of its drama programs. And consistent with the block’s trailblazing efforts, GMA Afternoon Prime continues to be the “Cradle of GMA Stars” where most of the network’s homegrown talents are molded and honed into becoming Philippine drama’s next big stars.

"GMA Afternoon Prime remains unbeatable and has charmed Filipino viewers after its strong performance in TV ratings since 2007 not only in viewer rich Urban Luzon but also in Mega Manila, according to data from the industry’s widely trusted ratings service provider Nielsen TV Audience Measurement.

"Based on NUTAM TV Households Data from January to partial December 2012 (available data up to Dec 7, Dec 2-7 based on overnight readings), GMA’s Afternoon Prime block posted a dominating 42.2 percent household audience share as against ABS-CBN’s 25.3 percent and TV5’s 14 percent .

"Yesterday’s Bride, topbilled by Lovi Poe with Rocco Nacino and Luis Alandy, clearly edged out competition and gained ratings stronghold in its timeslot since it launched on October 29.

"Based on nationwide household ratings data for the period October 29 to December 7 (Dec 2-7 data based on overnight ratings), the program registered 15.3 percent versus ABS-CBN’s Angelito: Ang Bagong Yugto with 8.7 percent and TV5’s Sine 5 and White Lie with 8.5 percent and 4.1 percent, respectively.

"Sana ay Ikaw Na Nga, a remake of one of the network’s most remarkable series in 2001, which is now topbilled by promising Kapuso stars Mikael Daez, Andrea Torres, and Gabby Eigenmann revolves around the unrelenting love story of Carlos Miguel Altamonte (Mikael) and Cecilia Fulgencio (Andrea).

"Based on NUTAM data for the period September 3 to December 7 (Dec 2-7 data based on overnight ratings), Sana ay Ikaw na Nga scored 15.8 percent versus ABS-CBN’s Kung Ako’y Iiwan Mo with 10.1 percent and Precious Hearts Romance: Paraiso with 9.6 percent. TV5’s Love You a Thousand Times and Pink Lipstick, on the other hand, registered 4.3 percent and 4.9 percent, respectively.

"Magdalena, headlined by Bela Padilla together with Pauleen Luna, Dion Ignacio, Pancho Magno and Ryan Eigenmann, offers a compelling drama about family, love and trust. The program’s intriguing and bold storyline keep viewers on the edge of their seats.

"Don’t miss the tears and thrills from GMA’s top-rating Afternoon Prime programs -- airing weekdays from 2:30pm to 5pm -- on GMA-7."