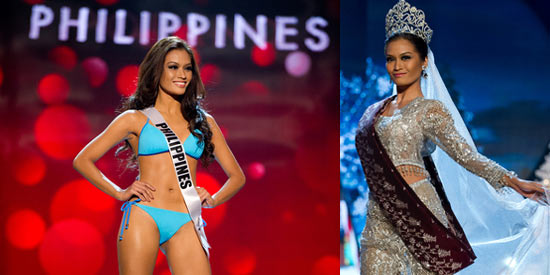 "Janine Tugonon vies to become the most beautiful woman in the universe as she competes in the annual “Miss Universe” pageant in Las Vegas, USA airing live via satellite this Thursday (December 20), 9:30 AM on ABS-CBN.

"Pageant fans are raving about Janine online as she rocked the preliminaries and conquered the stage with her signature “cobra walk” wearing her evening gown, swimwear, and national costume. Many believe Janine is a strong competitor and has a very big chance on winning the title.

"According to pageant expert Noel Berioso of OPMB Worldwide, an accredited online Philippine pageant site by the Miss Universe Organization to cover the “Miss Universe 2012,” Janine is surely one of the favorites this year after she got handpicked to participate in various pre-pageant activities among 88 other gorgeous women from different parts of the world.

"Berioso cited that Janine was chosen to join Ms Cayman Islands in a special photoshoot for hair sponsor CHI; be part of the kids fundraise and the Jubilee theater tour in The Bally’s Las Vegas; and just recently, talk about the “Miss Universe” benefit auction with Miss USA in an interview with Fox television.

"International pageant website GlobalBeauties.com also chose Janine as the top pick among Asian candidates this year and is one of their predicted top five countries in the competition.

"Since the pageant is delayed this year compared to the previous years, Janine has more time to prepare herself in every aspect making her more fit to compete for the crown.

"Meanwhile, Miss Universe 2011 3rd runner up Shamcey Supsup also took part in this year’s activities as she served as backstage and web host for the pageant.

"This marks the sixth year since 2007 that the Miss Universe Organization entrusted ABS-CBN as the home of Miss Universe in the Philippines.

"Don’t miss the most beautiful day in the universe happen once more on ABS-CBN this Thursday (December 20) in the live via satellite airing of “Miss Universe 2012,” 9:30 AM, after Kris TV.”