Imbestigador receives special citation from the Volunteers Against Crime and Corruption 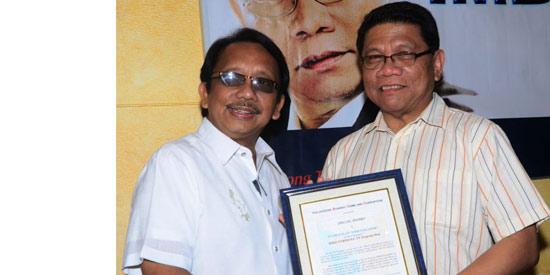 "Imbestigador and its host, broadcast journalist Mike Enriquez, received a special citation from the Volunteers Against Crime and Corruption (VACC) on December 17 at GMA Network Center, Quezon City.

"Imbestigador was commended for the crucial role it played in the arrest of an alleged member of the Dominguez Carjacking Group identified as Joel Jacinto AKA ‘Boy Mekaniko’ during an organized operation on December 13, 2012.

"Program host and GMA News pillar Mike Enriquez, on the other hand, was lauded along with the staff of Imbestigador for the vigilant and urgent action they observed in conducting in-depth research and surveillance that led to the arrest of the elusive Jacinto. Said arrest of Jacinto is expected to help expedite the prosecution of the members of the Dominguez Carnapping Group for the brutal murder of Venson Evangelista and Emerson Lozano two years ago.

"Brothers Roger and Raymond Dominguez, alleged masterminds of the Dominguez Carnapping group, were initially captured by the police along with other suspects associated to the murder of Evangelista and Lozano. It was only Jacinto who remained on the loose until a lead reached Imbestigador and revealed the suspect’s whereabouts. Imbestigador, in turn, immediately coordinated with the National Bureau of Investigation and a structured operation was mounted that led to the successful arrest of Boy Mekaniko.

"The National Bureau of Investigation’s Reaction, Arrest, and Interdiction Division (NBI-RAID) was also given a special award for its expeditious response to the case that brought about the successful arrest of Jacinto.

"VACC is a non-government organization committed to alleviating the plight of crime victims."