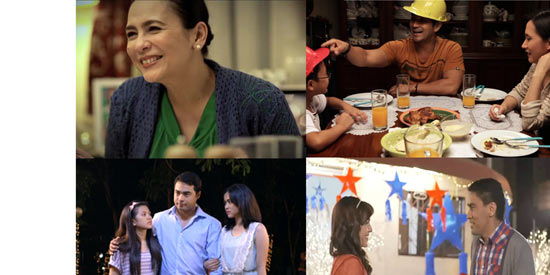 "In the spirit of the holidays, GMA Network presents another timely collection of short but no less inspiring Christmas films depicting precious moments between family members, lovers, and friends.

"Now on its 7th year, this annual film festival dubbed as “GMA Christmas Short Films” will have a special screening on December 23, Sunday on GMA-7’s Sunday Night Box Office (SNBO) at 10:30 P.M., and on GMA News TV’s Reel Time at 8:45 P.M.

"The four films, which feature different Kapuso stars, can also be seen during commercial breaks on the two channels.

"The first film “Love is Blind” highlights a special bond between a mother and her daughter as both are shown expressing their love through simple things. The role of the mother is played by Ms. Rio Locsin, while the daughter is played by Kristine Velasco.

"In “Memory Lane,” a mother tries to keep her family intact despite having an OFW husband and with her children starting to grow apart. She then leads her kids to a familiar place, and in doing so sparks old memories from childhood in them. Kapuso actor Sid Lucero stars in this heartwarming offering.

"A story of a young boy eagerly awaiting his father’s return for Christmas is given focus in the film “Homecoming.” Starring Raymond Bagatsing, Ayen Laurel and Miggs Cuaderno, the mini-sine shows how a seemingly heartbreaking news makes way for an unforgettable Christmas memory.

"Finally, Ramon Bautista, Pancho Magno, and Andrea Torres share a funny yet romantic moment in the Christmas love story “Ligaw.” Here, Ramon tries to win the girl of his dreams (played by Andrea) but meets an unexpected surprise along the way.

"The GMA Christmas Short Films festival is spearheaded by GMA Marketing and Productions Inc. (GMPI), the team behind the award-winning short films Hating Kapatid and Kabisera, which both recently won at the Araw Values Awards. Hating Kapatid was also recognized internationally at the 2012 Ad Stars Festival.

"The films are directed by Raul Jorolan, Topel Lee, Joel Ruiz, and Marla Ancheta, and can also be seen online at www.gmanetwork.com/shortfilmsyear7"