Shay Mitchell on Lea Salonga: "It was amazing because there she was, the voice of Jasmine in Aladdin, in my house!" 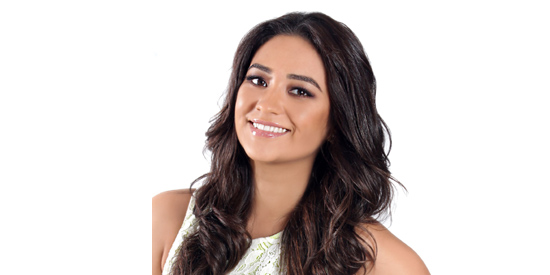 "Wow, they have Jollibee here!" Shay Mitchell shouts out, and her mom responds, "Yes, *****, that's where it came from." The Pretty Little Liars actress unabashedly shares what her mom told her when Shay noticed a Jollibee branch in Manila during her recent trip to the Philippines.

Raised in Canada by her Irish-Scottish father and Filipina mother, Shay visits her mom's native land for the first time last December 2012. She loves the halo-halo here as well as spaghetti and turon.

Before coming here, Shay didn't know what to expect, but she knew it was "beautiful, and that the people are really amazing, so I really wanted to come here and explore." This visit is also work-related for Shay as she promotes the start of Pretty Little Liars's new season on ETC starting January 12, 2013. She also conducted meet-and-greet sessions with her Filipino fans.

During this visit, she is excited because she has a little time to visit the islands, specifically Palawan, "for the photos and the people are really friendly, so I look forward to enjoying the Philippines."

Co-star Lucy Hale, who has been to the Philippines in February 2012, just flew in and out of the country on her visit. Shay recalls that Lucy only had the best things to say about the Philippines, that she had a great time and that the people were wonderful.

"I'm very proud to be half from here," Shay remarks. The Fil-Canadian star would love to do a project here if possible, "it would be really great to do a movie here."

Shay also happens to be related to international singer Lea Salonga. She recalls how Lea would visit them when Shay was younger, "it was amazing because there she was, the voice of Jasmine in Aladdin, in my house!"

Unlike her talented relative, Lea Salonga, Shay says she won't be starting a singing career anytime soon, preferring to dance instead, something that she really loves to do. But she is not closing her doors if there is somebody out who is willing to collaborate with her. “Why not?” she says with a laugh.

Decked out in a cream and lacy mini-dress, Shay was very forthcoming with the members of the Filipino press around her. When asked a distinct Filipino trait that she is proud of, she flashes a huge grin and answers, "I find that Filipinos to be a very happy group of people, with lots of love of family. And all of my friends love them. My friends come over to these big barbecues we have in the park, asking 'when's the next one?' I think they want to be Filipino too!"

As Shay explains that Filipinos are a genuinely happy people with a positive outlook, it is clear that this is a trait that is overflowing in Shay as well. She does notice though the proliferation of whitening products on her arrival here and she says, "I love my skin, and I'm gonna let it get so dark," perhaps so she will have more of a tan when she returns to Canada.

When her aunt asked her to carry an umbrella to protect her from the heat of the tropical sun, Shay refused. She explains that she wants "to embrace my color, it's a beautiful color and trust me, a lot of people around the world want what we have."

For now, Palawan is the only other place aside from Metro Manila that Shay gets to see, "but I would love to see the other islands, I think I'm gonna have to come back very soon and check out more places. Next time, I'll just block off a whole chunk of time and take my whole family with me."

Smart and beautiful, Shay Mitchell is definitely another global Pinoy we can be proud of, someone not ashamed of her roots and her skin color, who embraces wholeheartedly the Filipina in her.

Her character Emily Fields is an athletic girl who has come to terms with her sexual orientation, but still struggles over the loss of her friend Alison (Sasha Pieterse) and, now, the tragic murder of her girlfriend, Maya (Bianca Lawson).

She owes this confidence to, "being authentic, being true to who you are. If that's inside, it's gonna shine and show through, and being comfortable with who I am, and I think that is extremely important."

This is something that Shay advocates with other young people, especially girls, "to have that confidence in yourself, celebrating the things that you like, the things that make you beautiful, unique and different."

Shay and the cast of Pretty Little Liars can be seen on local television through ETC's match-airing schedule of season 3 beginning January 12, 2013.


SYNOPSIS FROM ETC. In all new episodes, we see “A-team” member Mona ready to head back to the halls of Rosewood High having been given a clean bill of health by Radley Sanitarium — much to the Liars’ dismay. With their former tormentor now back in their life, Aria, Emily, Hanna and Spencer each have their own opinion on the "new" Mona. Having made their lives a living hell little under a year ago, is she really cured? And what other secrets could she have up her sleeves? It's up to Mona to prove to the Liars if she has changed her ways or not.

Pretty Little Liars follows friends Aria, Spencer, Hanna and Emily as they search for answers to the mysterious disappearance and death of their best friend Alison. As the girls investigate in to what really happened to her and the secrets she left behind, they start receiving cryptic threats from a mysterious tormentor named “A” who knows all their personal secrets.

Pretty Little Liars Season 3 premieres with all new episodes this January 12, Saturday at 8 PM, Match aired with the U.S. on ETC.