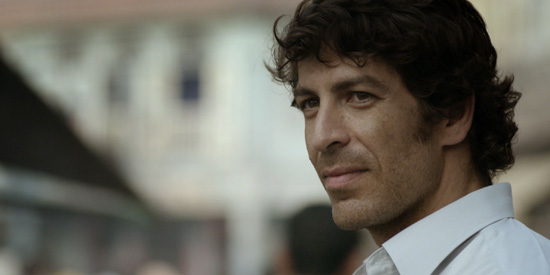 HBO Asia’s first original drama series, Serangoon Road, is said to deliver an intricate and thrilling storyline that captures the heartbeat of a nation struggling to counterbalance culture and crime and politics and patriotism in its aim to finally gain independence from global forces.

A co-production with Australian Broadcasting Corporation Television, this ten episode hour-long detective noir series, as stated in its press release, “is set against the tumultuous backdrop of 1960s Singapore, when the global balance of power is shifting and Singapore is at its crossroad—a time when the British colonial rule is coming to an end, and the island state can finally forge its own identity.”

The story begins with Patricia Cheng (international star Joan Chen) taking over her husband's detective agency after he is killed while on the job. Knowing that the company needs an investigator with good contacts, she enlists the help of Sam Callaghan (Don Hany), an Australian officer who was dishonorably discharged from the military after being caught up in the Malayan Emergency. His work for Cheng Detective Agency is his way to seek redemption for his sins as a soldier. The cases he then handles range from common to complicated, with conspiracies leading towards international implications.

On his first-ever Asian TV project, award-winning Australian actor Don Hany—who is best known for his roles in the Australian police procedural drama White Collar Blue (2002) and the critically-acclaimed East West 101 (2007)—shares in a phone interview with PEP.ph his unforgettable experiences while working in Asia, and how it is working with Chinese Hollywood star Joan Chen.

PEP.PH: Did you notice any Asian qualities that rubbed off on you while you were in Asia filming?

Don: Yeah, without a doubt. It is hard not to be influenced by the people in the places you are working in. I noticed in particular the Asian politeness or what you call patience towards work and a kind of deliberateness about storytelling and I enjoyed literally letting Asian sensibility to fit me. I enjoyed learning a little bit of Mandarin, which is pretty basic. I think it is such a beautiful language and so beautiful culture.

PEP.PH: How did you bag the role of Sam Callaghan? And how did you get involved in the project?

Don: I was approached by a director, Peter Andrikidis, who I had worked with a number of times. We worked on Water Rats, Heroes’ Mountain, East West 101, and Underbelly. We worked on some really interesting stuff and he approached me for the project. The timing was good that a lot of projects are now shifting in the Southeast Asia and it really is about time that we got involved into something that pioneered more coproduction between Australia and the rest of South East Asia. So we were both excited about an Aussie set in Singapore. So this is the first show that Australia shot entirely about another country. It is a long time coming, really. I guess that reflects more about Australian isolation. So all those things appealed to me, so that is how I got involved.

PEP.PH: How was it working with Joan Chen?

Don: Joan is a cinema royalty in Australia, in China, and even in the U.S. I mean, she brings you different energy and entity to the work when she comes to the set because she is a film star and we are making television and there was a main shifting of energy when she came to set and the way she approaches the work. She has an Asian sensibility about her, which transformed the way we shoot in a very positive way and I can’t thank her enough really for the influence she has on the production, influence she had on me, and the rest of the cast.

PEP.PH: What kind of research did you do for this role?

Don: I tried to learn as much Mandarin that I could. I ended up making up a few sentences really, but I kind of wanted to embrace as much of the characters background…. It was whole myriad of all sorts of things to engage with.

PEP.PH: How would you describe Sam Calaghan’s personality and how do you relate to him?

Don: Since I am of Australian origin, and he was kind of on the run, life is big trap for Sam. He was in a prison at the beginning of the show. He had some recurring dreams about…he is being too trapped there. And you know, he lost his best friend at camp and his mother. And I think he was hooked up to his father who was a soldier. He is expecting to have an exciting and adventurous life like him with campaigns involved overseas, but that became another trap for Sam versus institutionalized training. He was walking into different types of traps. He does not want to be Sam Callaghan anymore. He was reluctant to work with Patricia. And so I think he is motivated by fear of failure throughout all these things: he failed his mother, he failed his friend, he failed his daddy, he failed as a partner, and also he is failing himself with an addiction to opium. In a way, his life is all about fighting—like a fight with himself and a fight physical and mentally with everything else. I think he needs to feel alive. And there are parallels with everybody in a character like that. You know, you feel that struggle with demons. Personal ones and then there is a struggle with society, to remain or to conform to it, and then to rebel against it at times. So he is very similar to me in that sense but he is very different in the sense of guilt. I don’t carry the kind of guilt that he does. I am walking forward for life.

PEP.PH: What makes this series unforgettable for you?

Don: You see, what is so different about the show is that it is a cover story of Singapore but it is told in an Australian’s eyes. That is something that Australia has not seen. I am proud to be a part of the project. Being an HBO Asia’s first long drama, it requires, honestly, a lot of patience and cultural understanding. The storytelling attempts to do justice to all these events. Most people, most especially in Australia have no idea that such thing occurred within this region. I think I will never forget the difficulties, the challenge of making it. Truly, making it impossible to put forward at times because of unforeseen logistical and communication types of setbacks. We had a hand break on the show for a long time until we found rhythm with it. That was just natural between a co-production between two regions that is so different in the way they tell stories, you know. And so, I am proud that it happened. I would never try to forget that it was hard at times and just think about how it could have a positive effect on anyone who sees it and pave way for more co-productions between Australia and Southeast Asia.

PEP.PH: What is the difference between this show and other series you have done so far? How would you describe Serangoon Road?

Don: Compared to the shows I have worked on, it is really different. It is another country and about another country. So, just from the beginning, it is totally different in terms of the pace and the subject that we are treating. I love working in Singapore and being with so many great people. It is such a future city. I wish every city would be like Singapore. But it is a show about one of the most important periods in modern history, when you think about this region. And I think Australia does not know a little about what was happening in South East Asia during the cold war and the outcomes that took place after those events took a very huge impact on what types of relationships we enjoy today. So I am just so proud to be a part of this joint venture.

PEP.PH: What would you say about the work you’ve done for Serangoon Road, both personal and career wise?

Don: Personally, for a long time, I have been interested in Asian culture, and I have never had the opportunity to travel here. I have worked here but not in the same way because travelling here or doing a travel show means that I was supposed to be here in a superficial sense. I was never here to tell a story. I was here to sort of sell tourism. And coming here to work on a drama has opened my eyes to just the magnitude of culture, the depth of variety and it really has awakened me… So personally, it was never due that I work in Asia and the co-production between Australia and Asian production companies. And so is hard to divide the personal and professional game, just because they are very similar in a sense because I love my work. But professionally, I would love to open my door to work more here, every year. I would love to move here. It is completely embracing culture. And I would love to initiate my kids in the concept of tolerance, which there is no better country than Singapore because people live harmoniously and celebrate variety and difference. Truly, it does not happen all over the world but it is something we would want to make examples of because it is the way forward.

Serangoon Road will premiere this Sunday, September 22, at 9 p.m. on HBO / HBO HD. It is also available on HBO On Demand, with brand new episodes to air weekly at the same time.