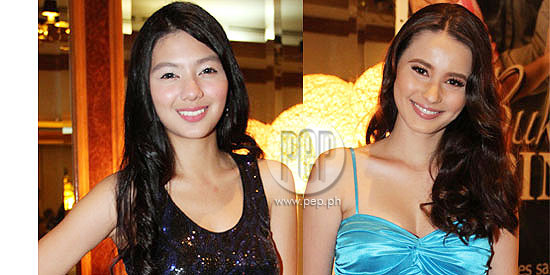 In the new GMA-7 afternoon teleserye Bukod Kang Pinagpala, Jackie Rice and Jennica Garcia step it up a notch as they take on mother roles for the first time. At 22 and 23 years old, respectively, the two Kapuso actresses are yet to be mothers in real life.

Under the direction of Don Michael Perez, Bukod Kang Pinagpala tackles the plight of three women who pine for the love of one child. Jackie and Jennica are joined by Camille Prats in this teleserye that depicts how three mothers fight for the custody of 8-year-old Lara (portrayed by Mona Louise Rey).

At a press launch held last Tuesday night, February 5, at GMA Network, Quezon City, Jackie and Jennica both talked about their idea of motherhood and becoming mothers themselves in the future.

NO PERFECT MOTHER. Jackie plays the social-climbing Janet Perez in Bukod Kang Pinagpala. At the start of the story, her character schemes in order to have a child with the wealthy and handsome Leandro Alcuar (Mark Anthony Fernandez), who also happens to be the husband of Bessie (Camille Prats).

While she succeeds in begetting a child with Leandro, Janet soon learns that Bessie is with child. To get back at Leandro, Janet abandons her baby daughter in front of the Alcuar residence.

At the press conference, Jackie told that she will be the exact opposite of her character when she becomes a mother: “Gusto ko maging perfect na nanay.

Jackie said that her own mother was never the typical parent to her.

In the future, she sees herself becoming the kind of parent who will push for her child to experience the best in life.

In Bukod Kang Pinagpala, Jennica plays the miserable character of Ofelia Almazan, a single mother whose daughter dies of a heart failure. Longing and desperate to get back her child, Ofelia decides to keep the abandoned child she finds in front of the house of Leandro and Bessie, her cousin.

Ofelia raises the child as her own, calling her Lara, and concealing her identity as revealed by a letter from its biological mother.

In real-life, Jennica revealed that she looks up to her two mother figures— Jean, her real parent, and her Ninang Vera, Jean’s best friend who looked after her while Jean worked in Japan.

The young actress said that she will be a mixture of both her own mother and godmother when she becomes a parent: “Hindi naman po too strict but at the same time, a best friend to my daughter or my future son.”

Jennica further justified why she cannot possibly fulfill the duties of a mother at this point in her life.

“I’m twenty-three now, my Mom was 18 when she had me,” Jennica recalled.