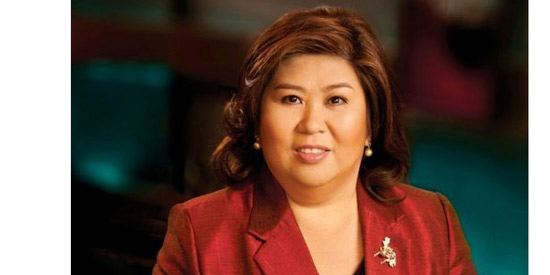 
"GMA Network kept its over-all lead in viewer-rich Urban Luzon and Mega Manila in February (February 24 to 28 based on overnight data), according to data from the industry’s more trusted ratings service provider Nielsen TV Audience Measurement.

"GMA scored an average total day audience share of 35.5 percent in Urban Luzon, which accounts for 76 percent of the total urban TV household population in the entire country, up 5.7 points from ABS-CBN’s 29.8 points, and up 21.4 points from TV5’s 14.1 percent.

"Meanwhile, in Mega Manila, which represents 59 percent of the total urban TV households nationwide, GMA garnered a winning total day audience share of 36.6 percent, ahead of ABS-CBN’s 27.7 percent by 8.9 points, and ahead of TV’s 15 percent by 21.6 points.

"GMA’s afternoon block widely known as GMA Afternoon Prime continued to be its primary ratings driver not only in the said two areas, but also in National Urban Television Audience Measurement (NUTAM), where it led competition by significant margins.

"In Urban Luzon, GMA Afternoon Prime scored the most number of viewers as revealed by its 39.2 percent total day average, up by a solid 14 points from ABS-CBN’s 25.2 percent, and up 24.5 points from TV5’s 14.7 percent.

"More television viewers also tuned in to the Kapuso Network in the afternoon timeslot in its bailiwick Mega Manila with a 40.4 percent total day household audience share, leading ABS-CBN’s 23.3 percent by 17.1 points and TV5’s 15.6 percent by 24.8 points.

"The Network launched two new Afternoon Prime dramas in February, the family drama Bukod Kang Pinagpala, and the romantic fantasy-drama Unforgettable. The initial episode of both programs rated higher than its ABS-CBN and TV-5 counterparts in NUTAM, Urban Luzon and Mega Manila.

"GMA’s average total day audience share in NUTAM dipped 1.4 points to 31.7 percent from the previous month’s 33.1 percent. The Network is confident, however, that it will regain its nationwide lead as it continuous to strengthen its programming line-up alongside its constant efforts to strengthen its reach across the country.

"This year, the channel launches game-changing, next level documentary series of a scale never before produced by GMA News and Public Affairs.