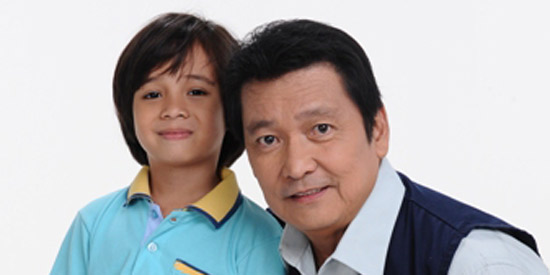 "Lapid expressed his excitement on the premise of the story because it includes horses as cast members. “The story has a mix of fantasy, comedy and drama. I also salute Caloy, the kid. He’s really good in acting,” he said.

"Viewers will not only pick-up moral lessons in the story as they will be primarily entertained by the ‘superhero’ horse voiced by Maliksi Morales as Chalk, Caloy’s (JB Agustin) friend and confidant. Some of the voice actors in the soap are Eddie Garcia, Rico J. Puno, Joonie Gamboa, John Regala, and Jeffrey Tam.

"Under the direction of Richard Arellano and Mervyn Brondial, the story revolves around the simple lives of Caloy, his parents Lucas (Jhong Hilario) and Helen (Precious Lara Quigaman), and their sickly horse, Chalk.

"Their quiet family life will change however when Caloy’s playmate, the son of the rich haciendero Miguel (Jake Roxas), falls off a horse and dies. Miguel, who will put the blame on Caloy, will hunt the child down. Caloy will flee with his loyal horse Chalk and will find refuge under Leon del Torro (Lapid), a baranggay captain.

"The forces of good and evil will clash when a meteorite falls, breaks into two, and lands separately on Chalk and Miguel. Powered by the meteorite, Chalk will change from a sickly horse to a powerful stallion that can talk while Miguel will experience evil powers, fueled by his lust for revenge.

"How will Chalk’s super powers help in protecting his best friend Caloy and what will be Leon’s role in all these?